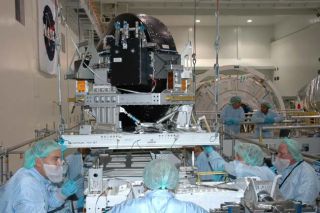 NASA engineers and technicians lower a control moment gyroscope - a replacement part to be installed at the International Space Station during an STS-114 spacewalk - into a carrier. The gyroscope is part of Discovery's cargo during NASA's first return to flight mission.
(Image: © NASA/KSC.)

The currentcrew of the International Space Station (ISS) will not make a special effort to replace a faulty circuit breaker that hobbled one of threegyroscopes used for orientation this week, NASA's ISS program manager saidThursday.

Instead,ISS Expedition 10 commander Leroy Chiao and flight engineer Salizhan Sharipovwill go ahead as planned with a March 28 spacewalk to install antennas andother equipment to the exterior of the space station.

The spacestation requires a minimum of two functional U.S.-built gyroscopes to maintainits position in space without switching to propellant-driven Russian thrusters.

Gerstenmaiersaid that a known fault with a single transistor within the circuit breaker,known as a Remote Power Control Module (RPCM), apparently caused a power lossan ISS gyroscope Wednesday. The fault is identical to an earlier glitchthat forced Expedition 9 astronauts to make an unplanned spacewalkrepair last year.

"When wemade the change out we knew the transistor had a fault in it and we assumed it couldshow up again [and] we were hoping it wouldn't be the case," Gerstenmaier said."But it looks like it is."

Spacestation officials said they will continue to examine other ISS systems to makesure the circuit breaker is the only failure.

ISSmanagers said the earliest the RPCM could be replaced could be during the nextspace shuttle flight, STS-114, aboard Discovery, since a two astronauts on thatmission are already planning to replace a broken gyroscope. If that fallsthrough, the spacewalk repair could be reset for later this summer, they added.

"Itcertainly is possible and doable," said NASA astronaut Michael Fincke, whospent six months as ISS flight engineer during the Expedition 9 mission andhelped make the initial RPCM fix. "It should go even smoother and faster them."

The RPCMglitch is one of several currently afflicting the space station and its crew,ranging from broken exterior lights to a finicky Russian oxygen generator and abroken toilet, both of which were repaired earlier today by Sharipov.

"The thingsthat are going on at the space station are normal," Fincke said, adding thatExpedition 10's Chiao and Sharipov are doing a fine job of balancing thedemands of maintenance and science aboard the ISS.

"We triedto be as thorough and creative with these things, to look at what's going on atthe station, to keep it operational," Gerstenmaier said.