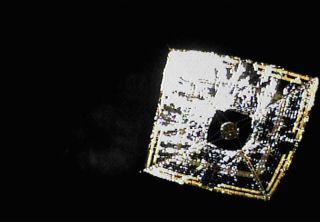 An unmanned probe riding a solar sail through space hasfelt its first accelerating push from sunlight in a successful test of itsnovel propulsion system, Japan's space agency has announced.

"The small solar power sail demonstrator 'Ikaros,'which successfully deployed its solar sail, was confirmed to accelerate by[the] solar sail receiving solar pressure," JAXA officials said in a July9 update.? "This proved that the Ikaros has generated the biggestacceleration through photon during interplanetary flight in history."

The effect stems from the cumulative push of lightphotons striking the solarsail. When measured together, it adds up to a small continuous thrust thatdoes not require fuel use by the Ikaros craft.

JAXA engineers used Doppler radar measurements of the Ikaros craft todetermine that sunlight is pressing on the probe's solar sail with a force ofabout 1.12 millinewtons (0.0002 pounds of force).

"This is a significant milestone on their flight ?probably the next-to-last step before complete controlled solar sail flight isachieved (turning the spacecraft to add or subtract velocity in a controlledmanner)," wrote Louis Freidman, co-founder of the California-based Planetary Society, in a messagechronicling Ikaros' solar sailing success on the society's website.

JAXA launched the solar sail Ikaros, short forInterplanetary Kite-craft Accelerated by Radiation Of the Sun, in May along withthe Venus-bound orbiter Akatsuki (Japanese for "Dawn"). The Akatsukiorbit is due to arrive at Venus in December.

The Planetary Society has been working to fly its ownsolar sail to demonstrate the space propulsion technology, as have NASAengineers. The Planetary Society is currently developing its next effort ? the LightSail1 mission ? using a spare NASAsolar sail. JAXA officials hope to follow Ikaros with an even moreambitious solar sailing mission, as well.

Friedman said scientists have long-known that photons oflight can push on spacecraft, but Ikaros is the first to attempt a true solarsailing flight.

"The acceleration by sunlight pressure on spacecrafthas been known about ever since the beginning of the space age. It is, however,a new proof of engineering ? harnessing the force of light pressure force tomodify a sailcraft's path in a controlled way," Friedman wrote.