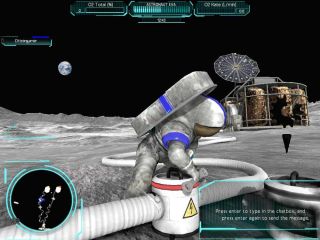 NASA's "Moonbase Alpha" game puts players in the role of an astronaut trying to save a lunar base. Here, the astronaut has replaced a broken power coupling and is tightening the power cable connections with a wrench.
(Image: © NASA/Virtual Heroes/America's Army)

Disaster unfolds rapidly at NASA's fictional moon base in2025. A meteorite strike has damaged vital solar arrays that keep the lifesupport systems running, oxygen levels are dropping fast for astronauts inside thebase, and that darn repair robot just got stuck. What's a space explorer to do?

The game also allows up to six players to cooperativelyrace the clock online, and to tackle larger repair maps for a greaterchallenge. Players can hop aboard a lunar rover to cross the longer distances.

"Moonbase Alpha" gives a taste of NASA's ambitiousspace game, a massively multiplayer online game, called "Astronaut:Moon, Mars & Beyond," where players would take on astronaut roles,such as a roboticist, and explore virtual versions of the moon and otherextraterrestrial locations.

"Moonbase Alpha" also represents a low-costinvestment for NASA, even if it's not a replacement for an actual rocket programthat can send astronauts back to the moon

"That's the appeal of using games and simulations,because they let you do things that are wildly unaffordable [in real life],"said Daniel Laughlin, project manager for NASA Learning Technologies at theagency's Goddard Earth Science and Technology Center in Maryland.

They control an astronaut who must visit an equipmentshed to get tools such as wrenches and welding torch to fix the base. But theastronaut can only carry one tool at a time, which means players should choosewisely and drop off their tools in strategic central locations.

One of the more entertaining parts of "MoonbaseAlpha" comes from deploying and controlling a repair robot that is armedwith either a welding torch or a basic arm. Driving the robot allows the playerto approach hazardous parts of the base to make repairs. It's possible todeploy both types of robots at once, even if the player can only control one ata time.

"Moonbase Alpha" also requires a bit ofprecision in its game interactions, so that a player's astronaut may struggleto hook up a bulky power cable if it's not aligned properly. Likewise, therobot has the expected turning radius of a wheeled vehicle and does not turn ona dime.

Most of the player interaction takes place by focusing acentral target reticule and left-clicking to take action. That works for themost part, aside from a few times when awkward camera angles may force theplayer to back up or move the astronaut around.

The trickiest part of "Moonbase Alpha" comesfrom figuring out just what the game wants players to do in a particular repairsituation. That can become difficult during a first play-through withoutknowing what repair tools are needed for each case, and especially when everysecond counts.

Voiceovers drop a few hints about the movement controlsand what to do next, but many players may encounter some trial-and-error beforethey actually succeed in saving the base within the 25-minute time limit. Thegame does allow players to turn off the time limit, but at the cost of nothaving their score recorded on the game's leader boards.

The cancellation of NASA's Constellationprogram that aimed to return astronauts to the moon prompted a debate amongNASA and the game developers about whether or not to shift the focus of"Moonbase Alpha" to Mars. But that would have required changingalmost all the animations at a late stage of development.

Some people also worried that nationallawmakers might view the game as proof that NASA still wants to aim for themoon first. Yet Laughlin pointed out that it's a video game, not a policydocument.

"What I have been told is that the moon is stillNASA's future, just not in the immediate future," Laughlin told SPACE.com.

"Moonbase Alpha" has already begun attractingattention from inside NASA. Laughlin told of receiving calls from NASAscientists and engineers eager for their missions to appear in "Astronaut:Moon, Mars and Beyond."

The tie-in of actual mission data could give futuregamers an extra dose of realism.

"People will come from projects and say hey, I wantmy Martian explorer or hypothetical Europa probe in there," Laughlin said."[The game] will expand as we get more missions signed on."

The game is available at http://store.steampowered.com/app/39000/.