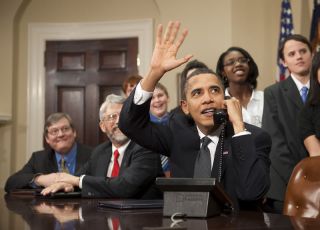 Since its announcement earlier this year, President BarackObama's new space exploration vision for NASA has met with a firestorm ofoutcry, confusion and misunderstanding.

Some of the most common misconceptions are that the planwould take NASA out of the business of human spaceflight, that the Presidenthas introduced an untenable gap in U.S. spacefaring ability, and that NASA'sbudget has been slashed. There have also been claims that the new plan was a secretpolitical scheme designed by hidden architects behind closed doors.

NASA's leaders are trying to set the record straight, andthe agency is ultimately hoping that the fervor will die down and people willcome to embrace the new direction ? which aims to send astronauts to visit anasteroid by 2025.

For now, misunderstanding and confusion about the planremain common.

"The new administration didn?t come in and kill thespace program, but that's what you're hearing a lot," said Leroy Chiao,former NASA astronaut and member of the Augustine committee, a blue-ribbonpanel President Obama put together last year to review NASA's plans.

In fact, the newproposal for NASA would increase the agency's budget slightly, to $19billion in 2011, a slight uptick from its 2010 budget of $18.3 billion.

"I wouldn't say the new administration is doinganything to shut NASA down," Chiao told SPACE.com. "Overall NASA'sgetting a slight bump."

President Obama also asked for an extra $6 billion over fiveyears to support a new initiative to spur private companies to developcommercial spacecraft capable of ferrying astronauts to and from theInternational Space Station.

That commercial initiative may be partly to blame for themisperception held by some that NASA will stop flying astronauts to space. Butit comes on the heels of NASA's space shuttle retirement, which was initiallyannounced in 2004 by former President George W. Bush as part of a then-newvision for space exploration aimed at returning to the moon.

After the space shuttles retire ? now potentially inFebruary 2011 ? America will be left without means to launch people to space.Only two more shuttle missions are currently scheduled after nearly 30 years inservice.

Under the new plan, NASA would work on designing a heavy-liftrocket to carry humans to an asteroid and on to Mars, while the job of transportingcrews to low-Earth orbit would be left to the Russians and the private sector.

But this new plan doesn't represent a cease of United Statesspace exploration, said science advocate Bill Nye, known for his role as TV's"Bill Nye the Science Guy," who will soon take up the post ofexecutive director of the Planetary Society, a nonprofit organization devotedto the space exploration.

"The idea of the new space policy is to explore newplaces in space and continue the retiring of the space shuttle, which wasstarted six years ago during the previous administration," Nye said.

Yet the looming retirement of NASA's three-orbiter spaceshuttle fleet has provoked fervent protest from the public, lawmakers and spaceleaders. Just this week, famed Mercuryastronaut John Glenn ? the first American to orbit the Earth ? decried thedecision to ground the shuttles.

"The world?s only heavy lift spacecraft and the U.S.?sonly access to space should stay in operation until suitably replaced by a newand well tested heavy lift vehicle," Glenn said in a June 17 statement.

However, the decision to retire the shuttles is not a newelement introduced in the Obama administration plan.

"That all this is coming up now is surprising to thoseof us who thought it was all settled," Nye said.

A consequence of the shuttle retirement ? also notunexpected ? is that America will be temporarily left with a gap in itsspaceflying ability, reliant on the Russians for rides to the space station.That situation was also a consequence of the previous moon-oriented program,called Constellation.

"Some of what you hear now is that because of this newdirection we've suddenly got this gap, but that?s not true," Chiao said."The gap was introduced in 2004. It was announced then that the shuttlewas going to be retired in 2010. Even back then under the most optimisticscenarios there would have been at least a three-year gap."

The more recent analysis by the Augustine committee foundthat the gap would have been at least seven years long under the Constellationprogram.

"Apparently it's people in the states directly affectedby the cancelation of the space shuttle just raising a stink and promotingmisinformation," Nye said. "We at the Planetary Society are excitedabout the new space policy because it's going to take us to someplace newrather than someplace old."

Another accusation made about the new directive is that itwas concocted in secret by a group with a hidden agenda.

"A plan that was invisible to so many was likelycontrived by a very small group in secret," famed first moonwalker NeilArmstrong said in a May statement to a Senate subcommittee reviewing NASA'snew space plan.

Yet others say the plan has very clear and publicprogenitors.

"The biggest misconception is that this whole idea wasdreamt up in the White House behind closed doors with no space communityinput," said space policy expert James Oberg, a former space shuttlemission control engineer. "The actual strategy is extremely similar to theWesley Huntress study by an international astronautical group."

He said the framework for the plan can clearly be seen inthe results from that 2004 report by Huntress, a former associate administratorfor space science at NASA and former director of the GeophysicalLaboratory at the Carnegie Institution in Washington, D.C.

"It absolutely negates the idea that his is some sortof political plot," Oberg said. "The plan went through years ofanalysis, modification, and critiques by a worldwide team."

The proposal also builds off of the findings from theAugustine committee's investigation, members of that panel have said.

Oberg said some of the misperceptions about the plan stemfrom "some very clumsy presentation missteps" in the rollout of theproposal.

NASA chief Charlie Bolden himself has admitted that heregrets some mistakes made in presenting the plan.

"You're looking at the guy responsible. I will take theheat," Bolden said Feb. 6, two days before NASA's first shuttle launch of2010.

He minced no words in criticizing the new space plan'srollout.

"Was it screwed up? Yes, it was," Bolden said atthe time.

Furthermore, the situation has become clouded by politicsthat don't always directly relate to the program itself, Oberg charged.

"The appalling clumsiness of the exposition of this policyis now having serious consequences," he said. "I think it?s prettyclear that the country's become polarized and its trust or distrust of thecurrent administration is affecting the reaction."

Ultimately, many are growing frustrated with the confusionabout the new plan and the prolonged debate.