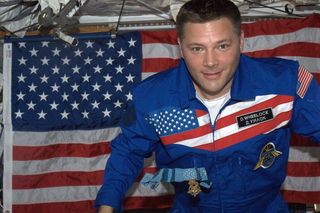 NASA astronaut Douglas Wheelock sends a Fourth of July message to the United States and poses with the Congressional Medal of Honor awarded to the late Lester Stone, an Army sergeant killed in action during the Vietnam War, on July 4, 2010. Full Story.
(Image: © NASA/Astro_Wheels)

An American astronaut spending the Fourth of July in space wished the United States a happy Independence Day from orbit on Sunday.

NASA astronaut Douglas Wheelock posted his July 4th messages and photos on Twitter, where he writes as Astro_Wheels, to mark the U.S. holiday on the International Space Station (ISS).

"Happy 4th of July!" wrote Wheelock, who is a colonel in the U.S. Army. "Celebrating Independence Day morning in the Russian 'Service Module', the ISS Command Post." [Wheelock's Fourth of July space photo.]

Wheelock is one of three American astronauts living aboard the space station. Three Russian cosmonauts make up the rest of the outpost's six-person crew.

In the past, astronauts have said they cannot see the fireworks from space during the celebrations that traditionally accompany the Fourth of July holiday in the United States. Fireworks are also not allowed on the International Space Station because they can pose a fire risk, NASA officials have said.

In mission commentary on NASA TV today, NASA spokesperson Rob Navias said there were no formal plans for the station's American crewmembers to mark the Fourth of July in space, though it was supposed to be an off-duty day because as a regular weekend day.

Instead, the astronauts watched over the arrival of a Russian cargo ship, which docked flawlessly after a failed first attempt on Friday. The station crew will get Monday off to rest, Navias added.

Still, Wheelock did manage to mark July 4th on his own.

He took a Congressional Medal of Honor into space with him when launching in mid-June. It belonged to Lester Stone, an Army sergeant killed in action during the Vietnam War, and was presented to Wheelock before his launch.

Wheelock sent a photo of Stone's medal from NASA's Harmony module, which serves as the station's connecting point for U.S., Japanese and European lab modules.

"To my beloved Doris Stone, and all that love peace and freedom," Wheelock wrote on Twitter, referring to Stone's mother Doris. "Grace and Peace on this blessed Independence Day!"