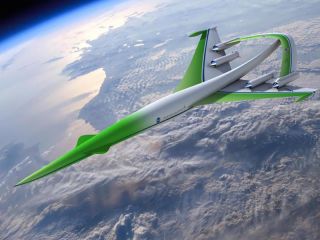 A new designconcept for a futuristic faster-than-sound aircraft could break through legalbarriers to supersonic flights over land by shushing the sonic booms created bysuch vehicles.

The conceptaircraft, envisioned by aerospace company Lockheed Martin, would revolutionizesupersonic cruising by relying upon a so-called "inverted-V"engine-under wing configuration, where the engines sit atop the wings ratherthan beneath, NASA officials said in a statement.

A Lockheed illustrationof the supersonic concept released by NASA is ?just one of several designspresented in April to the space agency's Aeronautics Research MissionDirectorate following a call for studies on advanced aircraft that could taketo the skies sometime around 2030 or 2035.

The UnitedStates and other nations previously banned overland supersonic flights becauseof their classic sonicboom and rattle effect that can ruin anyone's morning cup of coffee.

Thatprevented the now-defunct Concorde airliner from going supersonic except overwater during transatlantic trips. Since then, NASA has performed severalstudies with supersonic flights aimed at shushingsupersonic booms.

Suchconsiderations also matter for ongoing hypersonic tests. DARPA tested its HTV-2hypersonic glider prototype off the southern coast of California in late April,but lost contact with the vehicle early on during the flight.

The U.S. AirForce used the same Pacific corridor when it achieved the longesthypersonic flight in May with its X-51A Waverider. But the X-51A has yet tobreak the hypersonic speed record of NASA's X-43A project, which achieved Mach9.6 in November 2004.