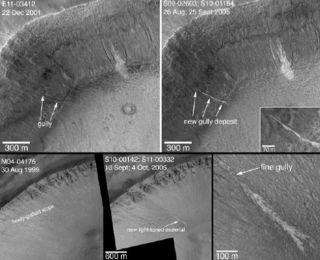 The floor and banks of a Mars gully on the northwest wall of a crater in Terra Sirenium changed between December 2001 and April 2005 due to a distinct light-toned material that flowed down the slope and formed a deposit (top). The same change occurred in a crater in the Centauri Montes region (bottom).
(Image: © Science)

Ten years ago this week, news from Mars made a huge splash onEarth ? water might still flow on the surface of the red planet. That news,announced by NASA, hinged on photos of newfound gullies etched across the Martiansurface, and a decade of other water-on-Mars discoveries ensued. Yet even 10years later definitive proof of flowing Mars water remains elusive.

The quest to find evidence of liquid wateron Mars, and the surprises that have turned up along the way, havetransformed our view of the red planet from a dry and dead planet to one where life might haveflourished and even live still.

"We are definitely on the path to exploring the habitabilityof Mars ? what it's been like in the past and even potentially now," saidMichael Meyer, lead scientist for NASA's Mars Exploration Program. [Photos:Water on Mars imagined.]

Scientists analyzing data from NASA's Mars Global Surveyorspacecraft 10years ago found what appeared to be gulliesformed by flowing water, as well as debris and mud deposits these flows mayhave left behind.

These features appeared so fresh that they might still be forming today,researchers said at the time. The changing appearance of gullies on Mars over time supportedtheir findings, theylater said.

NASAannounced the news on June 22, 2000, with the research later appearing in thatyear's June 30 issue of the journal Science.

Thereis plenty of evidence that water formed vast oceans in the distant past on Mars, carvingvalleys and other features that are clearly apparent on its surface.

Forinstance, last year researchers suggested globs ofsalty water were seen on the legs of NASA's Phoenix Mars Lander. But others on the same teamcountered that the spots may have been frost instead.

Therewas no doubt that water ice was present at near the Phoenix lander ? which setdown in the Martian arctic. In fact, water ice has been found on Mars at theplanet's poles, inside some craters and sitting beneath the surface across vastswaths of the Martian mid-latitude regions. But questions still remain on whenwater last flowed on the red planet's surface.

"There'sbeen no smoking gun evidence yet as to whether liquid water has been on thesurface of Mars in the recent past," Meyer said.

Oneof the main problems about proving whether or not water still flows on thesurface of Mars "is that where we have seen gullies also tends to be wherewe don't want to land spacecraft," Meyer explained.

"Thehope is that orbiter missions can catch something in the act involving liquidwater near the surface today," he said. "We do suspect there's liquidwater in the subsurface ? it's just depends on how deep you have to go."

Europe'sMars Express spacecraft has been probing for hidden pockets of ice and liquidwater using ground-penetrating radar. NASA's powerful Mars ReconnaissanceOrbiter has also been searching for evidence of Mars' watery past from orbit.

Onething has become certain over the past decade: There was once a lot of water onMars, and much frozen water remains hidden there.

"We'vegone from suspecting there was water on Mars once upon a time to deciding theredefinitely was water, and not only that there was water, but lots of water,"Meyer said. "Now with the Mars Reconnaissance Orbiter, we've found frozenwater evenat mid-latitudes, so the inventory of water on Mars is looking better andbetter as we learn more."

Theexcitement concerning water on Mars is rooted in how central we know water isto life on Earth.

"Howmuch water has been on Mars, how long we think it was there and how many placesmight have had it makes a difference in how habitable we think it might havebeen," Meyer said.

Althoughresearch continues to look at water on Mars, "in many ways we are movingbeyond specifically looking for water on Mars and more at what the consequencesof water might be ? for example, minerals formed in the presence of water,particularly maybe organic matter, which might have preserved what went on inearly Mars," Meyer said. And, of course, the whole effort is aimed atdetermining whether life ever did, or does, exist on Mars.

"Currentlywe're holding landing site workshops for the Mars Science Laboratory, which is set tolaunch next year, for specific places to go to look at such minerals," headded.