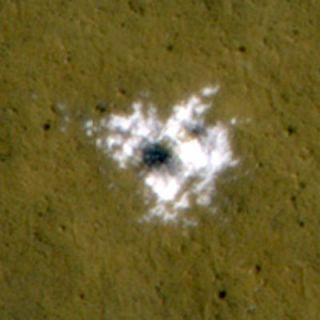 The HiRISE camera on NASA's Mars Reconnaissance Orbiter took this image of a new, 8-meter (26-foot)-diameter meteorite impact crater in the topographically flat, dark plains within Vastitas Borealis, Mars, on November 1, 2008. The crater was made sometime after Jan. 26, 2008. Bright water ice was excavated by, and now surrounds, the crater. This entire image is 50 meters (164 feet) across.
(Image: © NASA/JPL-Caltech/University of Arizona)

The icealso seems to be 99 percent pure, instead of the dirty dust and ice mixturesome scientists expected to see, scientists said today.

And whilenumerous surface features on Mars suggest that wateronce flowed on the red planet in the past, the new discovery - detailed inthe Sept. 25 issue of the journal Science - adds to the evidence that has beenpiling up in recent years that water exists on present-day Mars, in the form ofsubsurface ice. It also gives scientists a way to further probe the Martiansurface for signs of water ice.

"We wereable to conclude that this ice is a relic of a previously wetter climate," saidresearch team member Shane Byrne of the University of Arizona in a Thursdayteleconference.

Becausewater is essential to life as we know it, any findings of potentiallyonce-liquid water has implications for the search for evidence of possiblepast Martian life.

The newobservations indicate the presence of vast sheets of ice buried beneath theMartian surface left over from when the planet?s ice caps covered more of theplanet, researchers said. The ice averages about a meter thick and containsabout the same amount of frozen water as the Greenland ice sheet on Earth, scienceteam member Ken Edgett added.

"These buried ice sheets that extend from the poles allthe way down to 45 degrees [latitude] or so don't quite cover half of theplanet, but come close to covering half the planet," Byrne said. "Sowe're talking about maybe about a million cubic kilometers of ice intotal."

In August2008, members of the Mars Reconnaissance Orbiter's (MRO) Context camera teamexamined images of the northern Martian mid-latitudes taken by the camera forany dark spots or other changes not seen in earlier images. These dark marksare signs of meteorites that have recently crashed into the dust-coveredMartian terrain.

They foundseveral, and the following month, members of MRO's HiRISE camera team followedup by snapping high-resolution images of these suspected impact craters.

"Wesaw something very unusual when we followed up on the first of these impactcraters," said Byrne, a HiRISE team member, "and that was this brightblue material poking up from the bottom of the crater. It looked a lot likewater ice."

A few dayslater, MRO's Compact Reconnaissance Imaging Spectrometer (CRISM) was used totake the spectrum of the material and, sure enough, it found the spectral signatureof water ice.

?It wasjust crystal clear, no doubt about it, water ice,? said Selby Cull, a CRISM scienceteam member at Washington University in St. Louis, Mo., of one such signal.

Thebehavior of the material over the ensuing days also helped clinch its identity:"When we started monitoring the material, it faded away like you'd expectwater ice to fade, because water ice is unstable on Mars' surface and turnsdirectly into water vapor in the atmosphere," Byrne explained.

?So theseare quite small, small features,? Byrne told reporters Thursday. ?If you werestanding in one of these craters, they would only be about knee deep or so.?

Therelatively quick disappearance of the ice means the MRO teams were fortunate tohave spotted the craters when they did.

"Allof this had to happen very quickly because 200 days after we first saw the ice,it was gone, it was the color of dirt," Byrne said. "If we had takenHiRISE images just a few months later, we wouldn't have noticed anythingunusual. This discovery would have just passed us by."

But Phoenixwas at a more northerly locale than the new craters, so this fresh evidenceshows that the subsurface water ice extends further south than previouslythought.

"Weknew there was ice below the surface at high latitudes of Mars, but we findthat it extends far closer to the equator than you would think," Byrnesaid.

Alsosurprising was how clean the water ice was (something Phoenix also observed,along with the gradual sublimation of exposed ice). Marsresearchers expected there to be a 50-50 mix of Martian dirt and ice. What theyfound from MRO, however, was a mix that was just 1 percent dirt and 99 percentice.

"Thethinking before was that ice accumulates below the surface between soil grains,so there would be a 50-50 mix of dirt and ice," Byrne said. "We wereable to figure out, given how long it took that ice to fade from view, that themixture is about one percent dirt and 99 percent ice."

Though theMRO researchers had identified 80 to 90 craters around the Martian globebefore, this was the first time the spotted ice in the bottoms, likely becausemost of the others were more southerly and outside of the likely area ofsubsurface water ice.

Byrne toldSPACE.com that it was surprising to the team to find the bluish ice, though"in retrospect maybe it shouldn't have been." Scientists knew of theexistence of underground ice and had been monitoring craters as they formed,but "I guess we didn't put the two together," he said.

Several ofthe craters were also near the landing site of the Viking Lander 2. Viking alsolooked for water ice on Mars, but was only able to dig down about 6 inches (15cm) below the surface ? about 4 inches (10 cm) shy of where Byrne and hiscolleagues think the ice table sits.

"It'sa shame that didn't happen," Byrne said. "You might have been havingthis conversation 30 years ago."

How theice got there

There areseveral theories as to how such pure ice could form under the Martian surface.Byrne thinks that one of the most promising explanations is that the ice formedin the same way that so-called pure ice lenses form on Earth.

"That'swhere you have very thin films of liquid water around ice grains and soilgrains and they migrate around to form clear ice lenses on top of the icetable, even at temperatures well below zero," he explained. "Thisprocess is called 'frost heave' on Earth, and it's considered a nuisance inmost places because it cracks up roads and tilts walls and destroys thefoundations of houses."

However thewater ice got there, it tells scientists something about Mars recent climate.The ice is essentially "a remnant of a previous climate," Byrne said,one which likely existed around 10,000 years ago.

As theclimate changes and becomes drier, the ice is expected to retreat, though basedon estimates of its current extent, it hasn't done so quite as quickly asexpected.

"Theclimate has changes but the ice is still there," Byrne said. Just why thatis isn't clear yet.

These icelenses are likely to be a source of interest to those studying the possibilityof life on Mars as well, though Byrne said he's "not entirely sure if thisis enough water to be interesting to a microbe."

Byrne andhis colleagues suggest that fresh impact craters can be used as a new tool toprobe the depth and extent of Mars' subsurface water ice.

And thistime around, Byrne and the rest of the MRO team will be ready. Mars' northernhemisphere is heading into summer, and Byrne hopes to see about 10 more cratersover this a subsequent seasons, building up a map of where known subsurface iceexists. Of course, the observations depend on MRO's successful reboot out ofits current safe mode, which has temporarily suspended all science operations.

"Thisis I hope the start of a promising new method" of looking for water ice,he said.