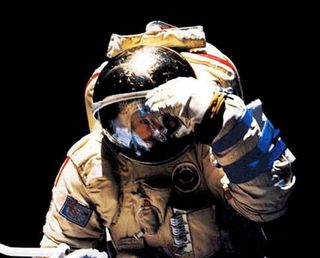 Leonid Kizim adjusts his visor during one of his six spacewalks outside the Salyut 7 space station in 1984.
(Image: © Roscosmos)

Sovietcosmonaut Leonid Kizim, who in 1986 commanded theonly mission in history to visit two space stations in one flight ? which alsomarked the first crewed flight to Mir ? died Monday, according to Russia'sFederal Space Agency. He was 68.

OnMarch 13, 1986, Kizim, a veteran of two earlier space flights, launchedwith crewmate Vladimir Solovyov on SoyuzT-15 from the Baikonur Cosmodrome. After two days catching up with the fledging station in orbit, they docked with the then-one-module Mir outpost.

As the inaugural crewto Mir, the first continuously crewed space station, Kizimand Solovyovspent 51 days configuring the core module and unloading two unmanned Progresscargo vehicles that arrived during their stay. It was the second missiontogether for the two cosmonauts, who earlier flew together on the Soyuz T-10mission in 1984.

Due to a shortage ofSoyuz spacecraft and because both space stations were in almost the same orbit,Kizimand Solovyovdeparted Mir on May 5, but rather than returning home to Earth as every otherstation crew had and would do, they maneuvered their Soyuz T-15 spacecraft on a28-hour rendezvous and dockingwith Salyut 7, the last of the Soviet Union's "second generation"stations.

Spending another 50days onboard Salyut as that station's sixth resident crew, the two cosmonautsperformed a pair of spacewalks, retrieving experiments that were left by theprevious crewmembers and testing the deployment and retraction of a 50-foot"girder constructor" device. Kizim and Solovyovworked to repair Salyut 7's heat, power and environmental control systems andthen on June 26, flew Soyuz T-15 back to Mir.

Transferring nearly900 pounds of hardware from the old to new outpost, they spent their final 20days in orbit making Earth observations.

On July 3, 1986, 13days before landing Soyuz T-15 back on Earth, Kizimestablished a career record for the most time in space. Three days later, hebecame the first to log a full year in space.

Kizim's duration recordswere a combination of his time on Soyuz T-15 and his prior two missions.

On Soyuz T-3 launchedin November 1980, Kizim together with Oleg Makarovand Gennady Strekalovflew a 13-day maintenance flight to the Salyut 6 space station. The station's13th residentcrew, the trio were the Soviet Union's first three-mancrew since the ill-fated Soyuz 11 mission in 1971.

By comparison, Kizim'sSoyuz T-10 flight four years later was a much longer mission: He, Solovyovand Oleg Atkovset the then-record for the world's longest spaceflight.

Their 237 days inspace began with their launch on Feb. 8, 1984, followed a day later by dockingwith Salyut 7. As the station's third expedition crew, the three cosmonautsperformed material science experiments, conducted Earth and astronomicalobservations and participated in medical studies, the latter overseen by Atkov,a cardiologist.

Kizim and Solovyovperformed a then-record six spacewalks to repair a fuel line that ruptured theprevious year and install a new set of solar arrays for the station.

Including his twospacewalks outside Mir, Kizim logged acareer total of 31 hours and 38 minutes working outside in the vacuum of space,ranking him 37th among the world's spacewalkers by time accumulated.

At the time of hispassing, his total time in space of 374 days, 17 hours and 56 minutes placedhim 21st on the list of astronauts' and cosmonauts' career durations.

Chosen to join thecosmonaut corps in October 1965 with the third group recruited from the SovietAir Force, Kizimretired from the space program two decades later in June 1987.

Born on Aug. 5, 1941,in KrasnyiLyman in the Ukraine, Leonid Denisovich Kizimgraduated as a pilot in 1963 from the Chernigov Lenin KomsomolHigher Air Force and flew as a test pilot and parachutist before being selectedas a cosmonaut.

In addition to histhree spaceflights, Kizim served onthe support crews for the joint missions of Soyuz 6, 7 and 8 in 1969. He wasback-up commander for Soyuz T-2, the first crewed flight of the T-classvehicle, and the Soviet-French T-6 mission as well.

After leaving thespace program, he served at the Russian Ministry of Defense's satellite controlcenter as its deputy director until1995 when he became director of the Military Engineering Academy of Aeronauticsand Astronautics in St. Petersburg, a position he held until he retired in2001.

In October 1986, twomonths after his third and final return from space, Kizimwas featured on the cover of National Geographic. Illustrating an articletitled "Soviets in Space: Are They Ahead?" the magazine's trademarkyellow frame surrounded a photo taken of a spacewalking Kizimoutside the Salyut 7 station.

A twice hero of theSoviet Union, Colonel General Kizim is survivedby his wife Galina and their two children.