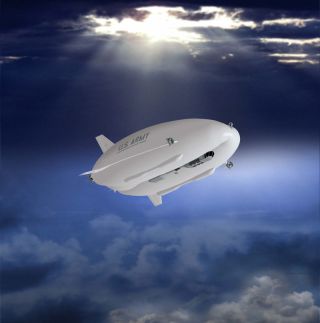 The United States Army has ordered a huge hybrid airshiplonger than a football field to watch over battlefields in Afghanistan by theend of 2011, according to the airship's builder Northrop Grumman Corporation.

The company has received a $517 million Army contract tobuild up to three of the huge military airships, called the Long EnduranceMulti-Intelligence Vehicles (LEMV). Such airships would serve as surveillancestations at 20,000 feet (6,096 meters) above sea level and could stay on watchfor as long as three weeks at a time.

That represents a staying power for intelligence,surveillance, and reconnaissance over a longer period of time than what today'srobotic drones such as the Predator or Reaper can provide. [7sci-fi weapons today.]

A heavy-lift configuration could transform the LEMV into asky transport that carries up to 15,000 pounds (6,803 kg).

The U.S. Army has also conducted militaryairship field trials for a tethered balloon that would carry radar to helpweapon systems track and shoot down cruise missiles.

Unlike blimps or lighter-than-airvehicles, hybrid airships such as the LEMV are heavier-than-air and requireboth vertical thrusters and forward movement to stay aloft. But theirincorporation of lighter-than-air gas for buoyancy allows them to stay up inthe air for much longer than traditional aircraft or drones.

To get the U.S. Army airship flying, Northrop Grumman hasteamed up with Hybrid Air Vehicles, Ltd. of the UK, which has a hybrid airship platformcalled HAV304. It also plans to work with Warwick Mills, ILC Dover, AAICorporation, SAIC, and other companies from 18 U.S. states to build LEMV

Northrop Grumman hopes that the LEMV could eventually alsoprovide for homeland defense as well as military surveillance over distantbattlefields. But the airship would first have to undergo tests anddemonstrations in Afghanistan after the 18-month target deadline.