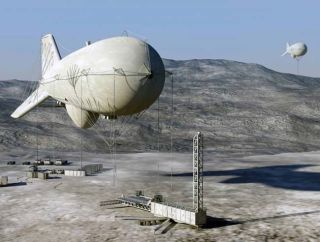 An airship that the U.S. Army says is the largest lighter-than-air vehicle ever used in U.S. military operations will make its debut flight in August as part of an effort to field a system to detect, track and shoot down cruise missiles.

Unlike ballistic missiles that typically fly a stable and predictable flight pattern, cruise missiles pose a particularly tough challenge — because of their ability to fly low and slow and change directions.

The weapon systems now available for cruise missile defense, such as the Patriot and Terminal High Altitude Area Defense systems, rely on ground-based tracking radars that cannot see over the horizon and can be negated by ground obstacles such as mountains. The Air Force flies radar-equipped airplanes that can track cruise missiles from above, but these systems require a lot of manpower and other resources to operate.

This led the Army to begin looking at the potential for radar-equipped aerostats — tethered balloons resembling blimps — to detect and track terrain-hugging cruise missiles. After a series of demonstrations to prove the concept, the Army in December 2004 launched a program called the Joint Land Attack Cruise Missile Defense Elevated Netted Sensor System (JLENS) with the award of a $1.4 billion development contract to Raytheon Integrated Defense Systems of Tewksbury, Mass.

Balloon with a view

Raytheon is working to deliver two JLENS systems, each consisting of two 242-foot (74-meter) long helium-filled aerostats, a surveillance radar, a fire control radar, mobile mooring stations and communications packages. One of the aerostats hosts a surveillance radar, which provides 360 degree coverage, and the other carries a fire control radar, which receives the surveillance data and generates targeting data for Army weapon systems.

The aerostats will operate nearly 2 miles (3 km) above the ground on tethers, providing the ability to detect and track cruise missiles as far as 124 miles (200 km) away in every direction, Army Lt. Col. Steve Willhelm, the JLENS program manager, said in an interview. The systems are designed to operate continuously for 30 days, come down for eight hours of maintenance and go back up for another 30 days.

The program in December completed its critical design review and is in the fabrication and integration phase. TCOM of Columbia, Md., is building the aerostats, the first of which will make its first flight in August up to about 2,952 feet (900 meters) above the ground at the company's Elizabeth City, N.C., manufacturing facility, Willhelm said.

"This test will confirm the confidence and maturity of the team to provide our warfighters this critical cruise missile defense capability," Raytheon spokeswoman Maureen Heard said in a written response to questions. "This system will allow Raytheon to continue to be the world?s best global capabilities integrator."

In December, the aerostat will be transported to the Army's Dugway Proving Ground, Utah, to be mated with its surveillance radar. The second aerostat and its fire control radar will be mated at Dugway next May, and the two platforms will be integrated as a system — or orbit — and begin limited testing in September 2010, Willhelm said.

Lighter-than-air vehicles have been used in U.S. military campaigns since the civil war, when manned balloons were lofted to give warning of incoming mortar fire. "Today U.S. troops in Iraq use aerostats for force protection with an Army program called the Rapid Aerostat Initial Development." Raytheon is also the prime contractor for the program, which uses a 55-foot (17-meter) TCOM-built aerostat that floats 984 (300 meters) high to perform surveillance with an electro-optical infrared sensor.

It has been tough to convince the Pentagon that cruise missile defense can be done with an aerostat, but many of the concerns about the effectiveness of JLENS "have already been addressed in demonstrations," Willhelm said. "Aerostats have been riddled with bullets in testing and continued to operate for hours before slowly descending to the ground, he said. Despite its size, the JLENS aerostat will not be easy to target because its lack of relative motion makes it tough for radars to discriminate," he said.

According to an Army fact sheet, the JLENS can be operated at a fraction of the cost associated with radar-equipped aircraft and provides persistent surveillance with low manpower requirements.

Despite these advantages — and the U.S. military's history of success with aerostats, proving they have a place in modern warfare has been a constant challenge, Willhelm said.

"One of the biggest challenges has been that this system is like nothing else the Army has seen," Willhelm said. "People are thinking we're taking a step back from being a 21st century force."

But the system also has attracted interest from some in the military for applications other than cruise missile defense. For example, the JLENS program office has received inquiries about the possibility of hosting surveillance and communications payloads to help meet the insatiable needs of U.S. forces operating in Iraq and Afghanistan, Willhelm said. The Army is studying how it might be able to swap JLENS payloads in and out while still performing its primary mission of cruise missile defense, he said.

The first JLENS orbit will go through an entire lifetime of use during the Army's test program, and the second is scheduled to be delivered to the first JLENS battery in September 2012, with initial operational capability envisioned for one year later. If the test program is successful, a decision on a production contract for 14 more JLENS orbits could be made in January 2012, Willhelm said.

Army spokesman Dan O'Boyle could not provide per unit cost estimates of the production models.