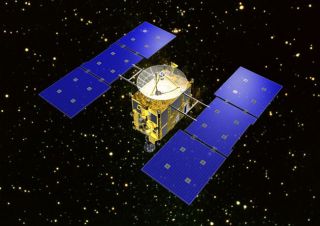 One cannot overstate the importance of Thursday night's Delta 4-Heavy launch from Cape Canaveral to national security, a mission by the massive rocket that will deploy "the largest satellite in the world" to hear the whispers of evil.

United Launch Alliance's Delta 4-Heavy is America's biggest unmanned rocketcurrently in service, capable of lofting the largest and heftiest cargos. The mammoth vehicle is created by taking three Common Booster Cores -- the liquid hydrogen-fueled motor that forms a Delta 4-Medium's first stage -- and strapping them together to form a triple-barrel rocket, and then adding an upper stage.

The nighttime blastoffshould be visually spectacular, lighting up the Space Coast with three distinct pillars of fire from the main engines trailing more than 200 feet long. Ideal viewing spots include off SR401 at Port Canaveral, along the 528 causeway or on the riverbanks in Titusville.

Thundering eastward across the open Atlantic, the rocket will soar out of sight within a few minutes as it embarks on a multi-hour mission to serve the U.S. National Reconnaissance Office, the agency responsible for the country's fleet of intelligence-gathering satellites.

The NRO's diverse spacecraft, including telescope-like observers and communications collectors, uncover looming dangers to the nation and provide surveillance over the world's hot spots.

The clandestine payload going up this time, known only by its launch identification number of NROL-32, is widely believed to be an essential eavesdropping spacecraftthat requires the powerful lift provided by the Delta 4-Heavy to reach its listening post.

In an address to the Air Force Association conference in September, NRO Director Bruce Carlson, a retired Air Force general, said this rocket launch would carry "the largest satellite in the world on it."

The NRO has flown various types of communication-interceptors since the dawn of the space age, and analysts say it is virtually certain this Delta 4-Heavy is hauling another.

"I believe the payload is the fifth in the series of what we call Mentor spacecraft, a.k.a. Advanced Orion, which gather signals intelligence from inclined geosynchronous orbits. They are among the largest satellites ever deployed," said Ted Molczan, a respected sky-watcher who keeps tabs on orbiting spacecraft. [Photo Gallery: Spotting Spaceships From Earth]

Destined for geosynchronous orbit 22,300 miles above the planet, this new spacecraft supposedly will unfurl an extremely lightweight but gigantically huge umbrella-like antenna to overhear enemy communications and aid U.S. intelligence.

"The satellite likely consists of sensitive radio receivers and an antenna generally believed to span up to 100 meters (328 feet) to gather electronic intelligence for the National Security Agency," Molczan said.

Observers think the mesh antenna's diameter is the size of a football field, comparable to the International Space Station's remarkable width. That explains why satellite-tracking hobbyists say these Mentor craft are "by far the brightest" in the high-flying geosynchronous orbital perch to see from the ground, outshining conventional television relay birds, weather sentinels and the like.

Although NRO satellites are secretive by nature, the spacecraft are visible by just looking up. Molczan is member of a hobbyist group that routinely finds and watches the craft while monitoring the skies with precision.

But despite the identity of this particular satellite being obvious, exactly where in the geosynchronous belt it will be positioned and what part of the globe it will cover are details that remain hush-hush.

"The upcoming launch may replace one of the older spacecraft in the series, or augment the fleet by occupying a new location in geosynchronous orbit," Molczan said.

Previous Mentor satellites were launched by Titan 4 rockets from Cape Canaveral in 1995, 1998 and 2003, plus the most recent Delta 4-Heavy in early 2009 carried one, according to the satellite-tracking hobbyists.

The craft lineage can be traced to the two Magnum satellites trucked to orbit aboard the space shuttle Discovery during the STS-51C mission in 1985 and STS-33 in 1989, historians have indicated.

An even earlier generation launched in the 1970s using Atlas rockets from the Cape, according to the authoritative Space Page website.

The upcoming schedule calls for several more significant launchesin the next few months:

Carlson said "this is the most aggressive launch campaign that the National Reconnaissance Office has had in 20 years, almost a quarter of a century."

"The other thing I can tell you is these are very important, because they all go to update a constellation which is aging rapidly. We bought most of our satellites for three, five, or eight years, and we're keeping them on orbit for ten, twelve, and up to twenty years," Carlson said.

"Now, when I buy something people complain about how expensive it is, but nobody ever complains when it's time to die and it keeps right on ticking. Some of these guys are like the Energizer bunny and they have really done marvelous work.

"We're doing things that were designed to essentially operate during the era of the Soviet Union that are today doing tactical intelligence collection that leads us to actionable intelligence on bad guys every day. Every day. And we're doing it with equipment that's 15, 18, and 20 years old."