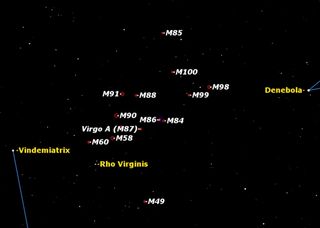 The dark of the moon in June is the best time to observe spring galaxies. Full Story.
(Image: © Starry Night® Software)

Late spring and early summer is the prime time for huntinggalaxies. Generally clear skies and pleasant evening temperatures make this afavorite activity for amateur astronomers around the time of new moon, such asthis week.

When you look at images like the deep field view from theHubble Space Telescope, which shows a wealth of galaxies in a single slice ofthe universe, you might assume that galaxies are pretty evenly spread aroundthe sky.

Basically that?s true, but we can?t always see them becauseother things get in the way. The main "other thing" is the MilkyWay galaxy, which wraps around the sky and effectively blocks our view ofdistant galaxies in that band.

What happens in late spring in the northern hemisphere isthat the Milky Way lies close to the horizon, so that our view overhead is atright angles to the plane of the Milky Way.

As a result, we can see beyond the Milky Way with minimuminterference. By a happy coincidence, the greatest collection of galaxies inour neighborhood also lies in that direction, the so-called Virgo group. [Amazinggalaxy photos.]

Whatever catalog of deep sky objects you choose to use, alarge proportion of the galaxies in it will lie in the constellation Virgo,with similar large numbers in the adjoining constellations Coma Berenices, UrsaMajor, Leo, and Canes Venatici.

The most popular catalog of deep sky objects among amateurastronomers is that compiled in the late 18th century by French comet hunterCharles Messier, after whom Messier objects are named.

Charles Messier?s catalog contains 110 of the finest deepsky objects, and includes 40 galaxies. Of these 11 are in Virgo, 7 in ComaBerenices, 6 in Ursa Major, 5 in Leo, and 3 in Canes Venatici: 32 out of 40 inonly 5 constellations, including two constellations (Coma Berenices and CanesVenatici) which most people have never heard of.

The greatest concentrationof galaxies lies on the border between northern Virgo and Coma Berenices.Many beginners at deep sky observing are reduced to terror at the thought ofexploring this region because of its many galaxies and very few stars. Yet, ifyou go about it systematically, it?s not very hard to explore.

The secret to mastering the Coma-Virgo cloud of galaxies isto concentrate on the galaxies, not the stars. Don?t try star-hopping: trygalaxy-hopping instead.

The jumping off point for any exploration of this region isthe interesting star Rho Virginis.

This star is about a quarter of the way from Vindemiatrix(Epsilon Virginis) to Denebola (Beta Leonis) and reminds some observers of oneof the hubs in a child?s Tinkertoy construction set: a bright star with threefainter stars marking the "spokes." The brightest of these three "spokes,"on the north side of Rho, points directly at a trio of bright galaxies slightlymore than a degree away and falling in a straight line: Messier 60, Messier 59,and Messier 58, from left to right.

Although these galaxies are "bright" in the eyesof experienced amateur astronomers, most beginners will probably have a lot ofdifficulty seeing them.

There are several things you can do to increase theirvisibility. The first, and most important, is to observe from a dark locationfree of lightpollution.

It is increasingly hard to find such spots in our modernover lit world. One of the many good reasons for joining an astronomy club isthat its members have probably identified the best observing spots in the localarea, and meet regularly there to observe.

An important technique for observing faint objects is whatis called "averted vision." The most sensitive part of the human eyeis not right in the center, but slightly off to one side.

As a result, if you look slightly to one side of yourtarget area, you are more likely to see it than if you look straight at it.

Finally, our eyes are better at detecting moving targetsthan stationary ones, so it often helps to move or tap the telescope to bringout really faint objects like galaxies.

Once you have spotted these three galaxies north of RhoVirginis, continue the line of galaxies the same distance to the right, and youcan?t miss Messier 87, the largest known galaxy and one of the brightest in thesky. Extend this line by the same distance again, and you will encounter theattractive pair of Messier 84 and Messier 86.

Where else can you find six bright galaxies forming astraight line?

Move back to Messier 87 and slightly beyond, so that youpick up Messier 58 as well. Using these two galaxies as the two bottom cornersof an equilateral triangle, look for a third galaxy, Messier 90, as the thirdcorner of the triangle to the north. Right in the middle of this triangle ofthree bright galaxies is a fourth smaller galaxy, Messier 89.

Draw an imaginary line from Messier 58 to Messier 90 andcontinue it the same distance beyond. There you should find Messier 91,probably the faintest and most difficult of all the Messier objects. Just toits right is a much brighter galaxy, Messier 88.

As you might guess from the numbers Messier gave thesegalaxies, he observed seven of them (Messier 84 to 91) for the first timeduring a single night, March 18, 1781.

The other three (Messier 58 to 60) were observed two yearsearlier, on April 15, 1779. It?s a sobering thought to look at those dates andrealize that, while revolutions were bursting all around him, Messier wascalmly observing the night sky and cataloging the beautiful objects which hefound there.