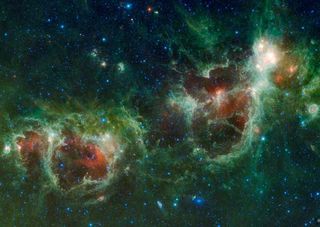 The Heart and Soul nebulae are seen in this infrared mosaic from NASA's Wide-field Infrared Survey Explorer, or WISE. The image covers an area of the sky over ten times as wide as the full moon and eight times as high in the constellation Cassiopeia.
(Image: © NASA/JPL-Caltech/UCLA)

MIAMI? Two massive, bubbling clouds of star-making factories were captured in astunning photo by a NASA space telescope that is surveying the entire sky ininfrared light.

Thehuge mosaic of the Heartand Soul nebulae was taken by the Wide-field Infrared Survey Explorer spacetelescope, which has completed approximately three-fourths of its infraredsurvey of the entire sky. A NASA advisory panel recently recommended that the telescope'smission end in October as planned, instead of extending its imaging work.

WISEwas designed to detect the faint glow of distant objects with instruments chilledto the point where they produce no detectable infraredlight.

Currently,WISE is producing approximately 7,500 images a day in each of four infrared wavelengths.

"Thisnew image demonstrates the power of WISE to capture vast regions," saidNed Wright, the mission?s principal investigator at UCLA, who presented the newpicture today at the 216th meeting of the American Astronomical Society inMiami. "We?re looking north, south, east and west to map the whole sky."

Thetwo nebulae are located about 6,000 light-years away in the constellationCassiopeia. The Heart nebula is so-called because of its resemblance to a humanheart. The nearby Soul nebula also resembles a heart ? only the more symbolickind with two lobes.?

Bothmassive star-making factories are marked by giant bubbles blown intosurrounding dust by radiation and winds from the stars. WISE's infrared eyesallow it to see into the cooler and dustier crevices of these types of clouds,where gas and dust are just beginning to collect and form into new stars.

TheWISE mission is set to complete its first map of the sky in July 2010. It willthen spend the next three months surveying much of the sky a second time, beforethe solid-hydrogen coolant needed to chill the infrared detectors runs dry.

NASAplans to release the first installment of the public WISE catalog in summer2011.

Theoriginal 10-month WISE mission, which was launched in December and managed bythe Jet Propulsion Laboratory in Pasadena, Calif., is scheduled to concludewhen the supply of solid-hydrogen coolant runs out, which Wright predicts willhappen in late October or early November.

But,since the spacecraft and telescope remain in good condition, Wright proposed athree-month extension of the WISE mission to complete the second half of thesecond sky survey in two of the four infrared wavelengths. WISE would be ableto capture these images even after the hydrogen supply is exhausted and theinstruments are no longer chilled.

TheNASA panel advised against this three-month extension, which would have added$6.5 million to the program?s $320 million price tag.

"Itwas a science per dollar decision, which is understandable," Wright toldSPACE.com. "The first time you see something is always better than thesecond time you see it. And, because of the amount of data collected, WISE is avery expensive mission."

"Wehaven?t figured out if there?s any inexpensive way to operate WISE and still takesurveys," Wright said.

About960,000 WISEimages have been beamed down from space to date. The telescope has snappedphotos of star-forming clouds, remote, powerful galaxies, and speckled dotsthat are asteroids in our solar system.

Sofar, the mission has observedover 60,000 asteroids, most of which lie in the main asteroid belt,orbiting between Mars and Jupiter. About 11,000 of these objects arenewly discovered, and about 50 of these belong to a class of NEOs, which havepaths that take them within about 30 million miles (48 million kilometers) of Earth'sorbit.

Oneof the goals of the WISE mission is to study asteroids throughout our solarsystem and to uncover more clues about how they vary in size and composition.Infrared imaging helps with this because it can get more accurate sizemeasurements of the space rocks than using visible light.

"Infraredwill help us understand more about the sizes, properties and origins ofasteroids near and far," said Amy Mainzer, the principal investigator ofNEOWISE, a program that studies and catalogs asteroids detected by WISE.

WISEis also expected to study Trojans, which are asteroids that run along withJupiter in its orbit around the sun in two packs ? one in front of the gasgiant, and one behind. The space telescope has already seen more than 800 ofthese objects, and by the end of the mission, it should have observed abouthalf of all the 4,500 known Trojans.

Theresults of this study will address competing theories about how the outerplanets evolved.

"WISEis the first survey capable of observing the two clouds in a uniform way, andthis will provide valuable insight into the early solar system," saidastronomer Tommy Grav of Johns Hopkins University in Baltimore, Md., whopresented the information at today?s meeting.

Cometshave also made their way into WISE images, and more than 72 have been observedso far ? more than a dozen of them new comets. WISE is taking a census of thedifferent types of cometary orbits to help explain what kicks comets out oftheir original, more distant orbits and in toward the sun.