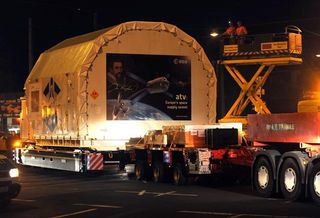 The AutomatedTransfer Vehicle 2, or ATV-2, a cargo ship built by the European SpaceAgency (ESA), is slated to launch toward the station in December.

ESA has named the new spacecraft after German astronomer andmathematician Johannes Kepler. The first in the disposable robotic cargo shipfleet was named Jules Verne. It flew a successful debut flight in 2008 anddestroyed itself intentionally at the end of its mission.

The unmanned space freighter underwent extensive systemtesting over the last few months, and has now been approved for the finalpreparation stage prior to its slated launch on an Ariane 5 rocket at the endof 2010.

The ATVJohannes Kepler will now make the journey to Europe's spaceport in Kourou,French Guiana in several sections, accompanied by 59 containers containing testequipment. Once it arrives in Kourou, it will be assembled and extensivelytested before being loaded with cargo and fuel.

"When the US space shuttle retires, ATV will be thelargest vehicle supplying the ISS," said Simonetta Di Pippo, ESA Directorfor Human Spaceflight. "Considering its technological challenges, likeautomatic rendezvous and docking, ATV is the most sophisticated space vehicleever built in Europe."

Europe's debut ATV JulesVerne launched by an Ariane 5 rocket in March 2008 and performed a perfect dockingwith the ISS.

These cargo vessels are part of ESA's planned fleet of ATVsthat will ferry propellants, food, water and equipment to the ISS. The ship hasa maximum net cargo capacity of up to 7.7 tons. The composition of this loadcan vary depending on the specific mission.

Once docked to the space station, an ATV can also help withcollision and debris avoidance by using its own engines to correct thestation's orbit, compensating for regular loss of altitude due to drag.

At the end of its mission, the vessel is filled with wasteand burnsup as it heads back into the Earth's atmosphere.

"The technology and experience gained with ATV areassets for Europe and its industrial competitiveness as well as a solid basisfor further developments to position Europe among the leaders in the exploitationand exploration of space, in low Earth orbit and beyond," Di Pippo said.

EADS Astrium is the prime contractor for the ATV, undercontract to ESA. Astrium is already hard at work on the successor to JohannesKepler ? ATV-3 'Edoardo Amaldi'.