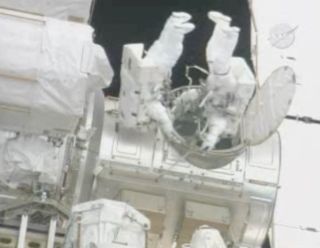 Astronauts Garrett Reisman and Stephen Bowen stepped out of the space station's Quest airlock to begin the first spacewalk of their STS-132 shuttle mission on Monday, May 17, 2010.
(Image: © NASA TV)

A pair of spacewalking astronauts battled a stubborn cableand a brief power outage while working outside the International Space StationMonday, ultimately falling behind in work to install a spare communicationantenna and other gear for the orbiting lab.

The partial power failure ? which posed no danger to thespace station or spacewalkers ? occurred early in the day's work as Atlantis shuttleastronauts Garrett Reisman and Stephen Bowen worked to attach a 6-foot(1.8-meter) antenna dish to the top of the orbiting lab. Their plannedsix-and-a-half hour spacewalk ended up stretching to seven-and-a-half hours,with the astronauts capping off the excursion at 3:19 p.m. EDT (1919 GMT).

"[We] ran into some snags along the way," leadspace station flight director Emily Nelson said at a Monday briefing. "Ithink we got through all of those and had a highly successful day."

Early on, a little after 10:00 a.m. EDT (1400 GMT), a powerunit on one of the space station's three command and control computers failed,temporarily stalling the spacewalk because it was responsible for powering tworobotic arm video camera views needed for the spacewalk.

Astronauts onboard the station quickly re-routed power tothe system, and the spacewalkers got back to work.

"At that point it wasn't a big problem because we had gottena little bit ahead because the crew was doing so well," said Lisa Shore,lead spacewalk officer.

Later, the two spacewalkers hit snags again, this time withthe new antenna itself. First, they found a persistent gap between the hugeantenna dish and its 8-foot (2.4-meter) high mast. Then an umbilical cablerefused to connect home.

When Reisman tried to force the cable in place, he saw metalshavings float off into space.

The spacewalkers suspected that the heating environment ofspace had led to some of their equipment expanding. They kept one piece in theshade and exposed the other to sunlight and managed to get the cable attached.

Mission Control, however, told Bowen to stop work that wouldfinish the antenna installation to give them more time to study the unexpectedevents. Instead, he lashed it in place and went on to other tasks. Missioncontrollers are looking into the issue further to decide when to sendspacewalkers back to complete the installation. When that happens, it shouldn'tbe a major task; Shore estimated it might take one crewmember between 30 and 45minutes of work to finish hooking up the antenna.

The antenna is a vital spare for the station'scommunications system and is responsible for providing backup telephone,e-mail, video and other two-way communication services between the station andits Mission Control centers on Earth.

Overall, mission managers said they were happy with how thespacewalk went.

"We've had a few glitches here and there but they'renot significant in the grand scheme of the things we're trying to accomplish,"said LeRoy Cain, STS-132 mission management team co-chair.

For much of the spacewalk, Reisman rode on the space station'soutstretched robotic arm between a cargo pallet and the top of the orbitinglaboratory. The ride offered some amazing views on the trips back and forth.

"That's awesome," Reisman said when he firststepped out into space. "Nice sunny day out here."

Later, Bowen got some down time to enjoy the viewsof Earth from space while he was waiting for Reisman to arrive at theirwork site.

"I don't know what else Ican do," Bowen said.

"You should enjoy being inouter space on a spacewalk with a camera and a view," advised spacewalkchoreographer and mission pilot Tony Antonelli.

"I guess I could dothat," replied Bowen. "Where are we?"

"The top of SouthAmerica," Antonelli replied.

Today's spacewalk is the first of three planned for theshuttle's 12-day mission, which is slated to be the last flight of Atlantis andalso includes the delivery of a new Russian room for the station.

Atlantis arrived at the space station Sunday after a two-dayorbital chase that began with a Friday launch from Florida. [Atlantisshuttle launch photos.]

Atlantis'mission is the shuttle's final planned spaceflight after 32 missions sinceit entered service in 1985. Only two more shuttle flights are scheduled (onDiscovery and Endeavour, respectively), before NASA retires the orbiter fleetlater this year.

However, Atlantis will not be mothballed immediately sinceit must also be ready to serve as a rescue ship for the final planned shuttlemission on Endeavour, which is slated to launch no earlier than Nov. 27, NASAshuttle officials have said.