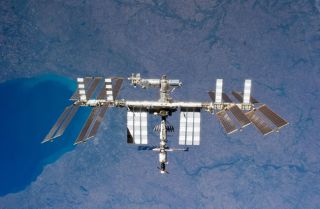 The International Space Station as seen by the last shuttle mission to visit it, the STS-131 flight of the shuttle Discovery in April 17, 2010.
(Image: © NASA)

The space shuttle Atlantis is closing in on theInternational Space Station with six astronauts and a new Russian room for the orbitinglab onboard.

Atlantis launchedFriday on her final planned journey to space ? the 12-day STS-132 mission.The shuttle is slated to dock at the orbiting laboratory Sunday at 10:27 EDT(1427 GMT).

"The orbiter has been performing exceptionallywell," STS-132 Mission Management Team co-chair LeRoy Cain said Saturday."We're looking forward to being back at the space station tomorrow."

Before the two spacecraft link up, Ham will steer Atlantison a back flip ? called the rendezvous pitch maneuver ? at 9:26 a.m. EDT (1326GMT). The move will allow astronauts on the station to snap detailedphotographs of the shuttle's underbelly, where a sensitive heatshield covers the surface to protect it during re-entry to Earth. Thesephotos will be analyzed to make sure the insulating tiles weren't damaged byfoam dislodged from the shuttle's external tank during Atlantis' launch.

"It's a manually flown rendezvous with the shuttle tothe space station," pilot Tony Antonelli said in a preflight interview."[Ham will] get us up underneath the space station and do a back flip sothey can take pictures of our tile. That?ll complete the part of the inspectionthat we don?t get done on Flight Day 2."

Shuttle astronauts made a detailed scan of the heat shieldon the shuttle's wings and nose on Saturday. The inspection was slowed down bya cameraglitch, but the crew was able to use a backup camera to complete most ofthe scan. Mission managers say preliminary data suggest Atlantis is lookinggood.

"The external tank performance looked very, verygood," Cain said. "But we did see a few debris items and then we sawa little bit of places where we lost some foam in the external tank videoimagery."

He said further review of the launch videos and inspectiondata will be needed before NASA can determine for sure if Atlantis is safe tofly back home.

Docking will be a bit less complicated than it might havebeen since mission managers determined that it wouldn't be necessary to movethe station to a higher orbit to avoid a rogue piece of spacejunk.

NASA contemplated the maneuver when tracking showed a bit ofspace junk on a course that may have posed a risk of collision with thestation. After analysis, though, engineers decided the debris would fly outsidethe risk zone, so the station was allowed to stay in its current orbit. Even ifthe move had been necessary, it would have impacted the docking plans verylittle, mission managers said.

After Atlantis links with the orbiting laboratory astronautsmust spend time checking the seal between the two craft for leaks. They plan toopen the hatches between the shuttle and station at 12:30 p.m. EDT (1630 GMT).

All sixastronauts on the STS-132 mission are veteran spaceflyers. Many are lookingforward to returning to the space station for a repeat visit.

"At some point in there you actually look out the windowwhen you?re close and you see this monstrosity that is out there orbiting theplanet," Ham recalled of seeing the station on approach. "There?sthat moment of 'Holy cow! What has humanity built up here?' It is amazing andI?m looking forward to that because the station?s even bigger than it was lasttime I was there."