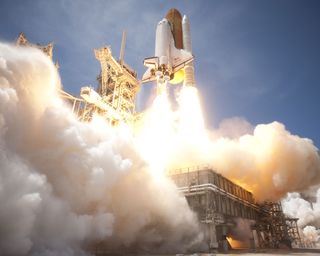 NASA's Kennedy Space Center in Florida, an exhaust plume builds on Launch Pad 39A as space shuttle Atlantis lifts off on the STS-132 mission at 2:20 p.m. EDT on May 14, 2010 on its final planned mission.
(Image: © NASA/Tony Gray and Tom Farrar)

A glitch on the space shuttle Atlantis' scanning sensorsystem has slowed down the inspection of the orbiter's sensitive heat shield.

The inspection is a normally scheduled check to hunt for anysigns of damage on the shuttle's insulation tiling that could pose a risk whenit re-enters Earth's atmosphere. But a balky system called the pan-and-tiltunit that controls the sensor's motion has stalled the six-hour scan. Afterhours of troubleshooting, the shuttle astronauts determined that a cableleading to the unit was being pinched by another piece of hardware on Atlantis,restricting how far the sensor can tilt.

"It is crystal clear exactly where the pinch is,"Atlantis commander Ken Ham radioed to Mission Control. "No matter ofpanning is going to help change that situation."

Eventually, NASA instructed the astronauts to switch to a secondarysensor that uses a laser camera system and a digital camera to take photos ofthe heat shield. This process is normally used toward the end of a shuttlemission for the so-called late inspection. The secondary sensor system requireslighting, so the crew was forced to work only during times when the spaceshuttle was passing over the daylight side of Earth, further slowing down theprocess.

The heat shield scan will help the shuttle's six-mancrew make sure Atlantis is in good health for its mission to the spacestation, where the astronauts plan to deliver a new Russian research module andloads of spare parts and supplies, including a set of solar array batteries anda space-to-ground antenna. Docking is set for Sunday morning.

Even when it runs as usual, the inspection is a laboriousprocess.

"It's a little bit of a long day, a longinspection," Atlantispilot Dominic "Tony" Antonelli said before launch in a NASAinterview. "We're going ... to inspect the leading edge of both wings andthe nose. It's a long series of automated robotic procedures."

Antonelli is one of three Atlantis astronauts who will tradeoff using the shuttle's 100-foot (30-meter) inspection pole to scan sensitiveheat shield panels along the vehicle's wing edges and nose caps for dings.Cameras and laser instruments will record the health of those panels and thedata will be beamed to Earth for analysis.

"We have to do the top, the front, and the bottom soit'll be several of these in a row, and it'll take most of the day,"Antonelli said.

Atlantis soaredinto orbit from Florida Friday afternoon and is flying its last scheduledmission before retiring to museums. After this trip, there are only two moreshuttle flights planned. [Atlantis'launch photos.]

The shuttle is slated to dock with the International SpaceStation Sunday at 10:27 a.m. EDT (1427 GMT). They will spend about a weeklinked with the orbiting lab to deliver a new Russian research module and aload of spare supplies, including a set of replacement batteries and a newspace-to-ground antenna.

Scanning the heat shield is a normal precaution to ensurethat the vehicle was not hurt by any foam debris falling from the shuttle'sexternal tank during liftoff.

The inspections have been a standard part of space shuttlemissions after the loss of the shuttle Columbia and its seven-astronaut crew in2003. A piece of foam debris damaged that orbiter's heat shield during launch,leading to its destruction during re-entry.

But a preliminary look at video from Atlantis' launch hasnot indicated any cause for concern, mission managers said.

Before arriving at the orbiting lab Sunday, Atlantiscommander Ken Ham will fly the spacecraft through an orbital flip so astronautson the station can snap photos of the thousands of black heat shield tileslining the shuttle's belly.

Data from those photos, as well as a final inspection identicalto today's survey, will also be examined before Atlantis is given a clean billof health for its planned May 26 landing.

Before Atlantis arrives at the space station, it is offeringa raretreat for skywatchers on Earth. The shuttle and space station are flyingover much of the United States and should be clearly visible, weatherpermitting, to observers on the ground. Venus and the moon can also be seen inthe night sky along with both spaceships.