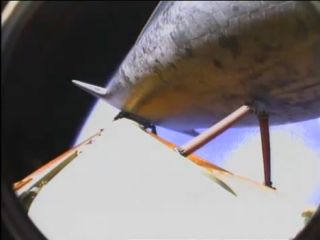 This view from a camera mounted on the external fuel tank of space shuttle Atlantis shows the spacecraft as it nears its final orbit after a successful launch from Florida on May 16, 2010. Moments later, the tank was jettisoned as planned.
(Image: © NASA TV)

A camera glitch that occurred while astronauts were inspectingthe space shuttle Atlantis' heat shield Saturday shouldn't cause any overallnegative impact to the mission, a NASA official said.

The six-man crew aboard shuttle Atlantis spent Saturday ? theirfirst full day in space after launchingFriday afternoon ? scanning the orbiter's sensitive insulation tiles toensure they were not damaged during the liftoff.

While checking out the shuttle's inspection boom ? a longpole tipped with sensors used for the scan ? theastronauts had trouble moving the camera used to record data. After hoursof troubleshooting, they discovered that a cable connected to the sensor camerawas pinched in a piece of hardware on the shuttle. The glitch forced the crewto revert to a backup camera normally used during a later inspection.

Atlantis is slated to catch up to the International SpaceStation Sunday at 10:27 a.m. EDT (1627 GMT) to begin a weeklong stay to delivera new Russian lab and spare supplies.

"The crew is proceeding towards rendezvous and dockingtomorrow as planned," Sarafin said.

The original camera intended for the scan has a wider fieldof view and contains its own light source. With that sensor system unusable,the astronauts opted to use a second sensor camera that takes more detailedimages. However, that camera has no light source so could only be used whileAtlantis was flying over the daylight side of Earth.

"It's kind of a mixed bag," Sarafin said of the cameraswap. "We have a little bit better coverage using the planned camera butit's higher-resolution imagery using the camera we used today."

Given the slower pace of today's inspection, the astronautswere not able to completely scan all the areas of the shuttle that theyplanned. In particular, they had to stop before the finished inspectingAtlantis port, or left-side, wing. They plan to cover that area using theregular camera attached to the end of the shuttle's robotic arm, after Atlantisdocks with the space station.

"We can get adequate scans and imagery of that entireportion of the port wing since it's on the same side as the shuttle roboticarm," said Atlantis' Mission Management Team co-chair LeRoy Cain.

In addition, more data on Atlantis'heat shield will be gathered when the shuttle flies in a planned back flip asit approaches the space station to allow astronauts stationed there to snapphotographs of its underbelly and sides.

"Once we get all that imagery on the ground the teamwill determine if we need to get additional information? or if we've got all ofwhat we need," Sarafin said.

If necessary, astronauts can undertake a second, morethorough inspection of the shuttle's heat shield during their fifth day in space,when some time has been set aside for the purpose.

Another issue that came up was a possible threat from apiece of stray space debristhat appeared to be headed toward the International Space Station.

"We know that this object is there but we don't knowthe source of it," Sarafin said. "And we know that it's going to comein relatively close proximity to the International Space Stationtomorrow."

Space junk, such as used rocket parts, broken satellite bitsand other trash, poses a serious risk of impacting spacecraft and causingdamage, since both it and any vehicle in orbit are moving at extremely highspeeds.

Ultimately, mission managers determined that this particularpiece of debris is not a threat to the station, so they decided not to maneuverthe orbiting laboratory to avoid it. Even if the station had had to move, itlikely wouldn't have significantly impacted Altantis' plans to dock tomorrow.