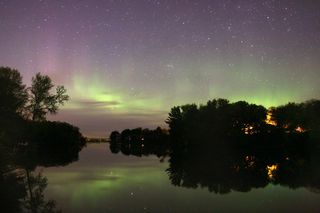 The auroralight show occurred overnight May 2 when a stream of high-energyparticles from the sun, the solar wind, hit the Earth's magnetic field to kickoff a strong 15-hour geomagnetic storm, according to the website Spaceweather.com,which monitors space weather.

There's a 20 percent chance of a similar storm onSaturday, May 8, when the remnants from a recent coronal mass ejection may hitthe Earth's magnetic field, according to the National Oceanic and Atmospheric Administration(NOAA). Skywatchers in the higher latitudes of Earth may get a good view. [Moreaurora photos.]

During Sunday's event, the solar wind interacted withEarth's magnetic field to create a huge aurora display that stretched tounusually low latitudes, making it visible below the Canadian border to someskywatchers in the northern United States. The red auroras during thedisplay, in particular, stood out.

The auroras also dazzled Tony Wilder, of Chippewa Falls,Wisc., who photographed green auroras reflecting off a nearby body ofwater.

"It's been 5 years since I last saw the Northern Lightsin my neck of the woods," Wilder wrote in a comment posted toSpaceweather.com. "And what a show it was!"

The space station is home to six astronauts and as largeas a football field. It is the largest man-made structure in space and caneasily be seen from Earth by the unaided human eye.