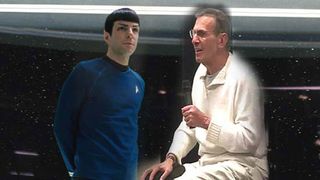 Nimoy, who became famous playing Spock in the original Star Trek series, spoke Thursday here at the 26th National Space Symposium, where he was accepting the 2010 Douglas S. Morrow Public Outreach Award. The actor said he's a big fan of real-world spaceflight, as well as the fictionalized version, and had watched President Barack Obama's major space policy speech that afternoon.

"I do believe that President Obama means it when he says that he is 100 percent interested in space," Nimoy told reporters. "I know for sure he's a Star Trek fan," he said, because the first time the two men met, President Obama made Spock's traditional V-shaped finger spread.

Nimoy said he didn't feel qualified to speak to the merits of the president's new plan for space, but that it sounded like a positive direction.

"All-in-all I'm looking forward," he said. "I hope it's going to work out for the best."
Nimoy said he has followed space exploration throughout his career, and remembers driving to work on the set of Star Trek when he heard the news of the Challenger accident.

"Those pictures will never go away," he said of his memories of the explosion replays.

It's just beginning to sink in that the space shuttle era is ending, Nimoy said.

"I think people will be grieving," he said. "I will. I'll be sad to see it go. It's been a very important part of our image of NASA and space for the last number of years."

He even credits real-life space exploration for the success of his Star Trek show. When it was first run, the program wasn't that successful, he said, but began to pick up in reruns after the Apollo moon missions.

"In 1969 Neil Armstrong stepped on the moon, and I think that had a great impact on Star Trek reruns," Nimoy said. "The show began to find a tremendous new audience."