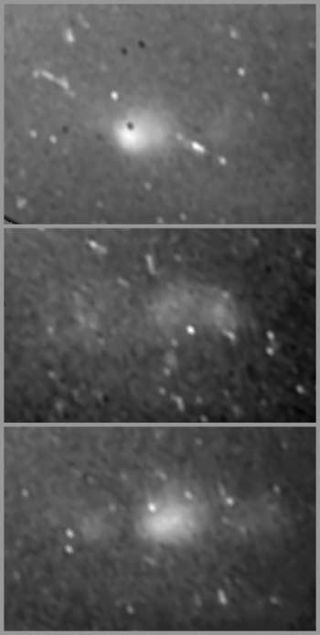 NASA's Cassini spacecraft captured the first lightning flashes on Saturn when it captured these images on August 17, 2009.
(Image: © NASA/JPL-Caltech/SSI)

"The visible light images tell us a lot about thelightning," said Ulyana Dyudina, a Cassini imaging team associate based atthe California Institute of Technology (Caltech) in Pasadena, Calif., who wasthe first to see the flashes. "Now we can begin to measure how powerfulthese storms are, where they form in the cloud layer and how the opticalintensity relates to the total energy of the thunderstorms."

After waiting years for Saturnto dim enough for the spacecraft's cameras to be able to detect bursts oflight, scientists were able to create the movie, complete with an accompanyingsoundtrack that features the crackle of radio waves emitted when lightningbolts struck. [Watchthe video]

"This is the first time we have the visible lightningflash together with the radio data," said Georg Fischer, a radio andplasma wave science team associate based at the Space Research Institute inGraz, Austria. "Now that the radio and visible light data line up, we knowfor sure we are seeing powerful lightning storms."

Cassini,launched in 1997, and NASA's Voyager mission, launched in 1977, had previouslycaptured radio emissions from storms on Saturn.

A belt around the gas giant, where Cassini previouslydetected radio emissions and bright, conservative clouds, even earned thenickname "storm alley." Cassini's cameras, however, had been unableto obtain pictures of lightning flashing.

Since the robotic spacecraft'sarrival at Saturn in 2004, it has been difficult for Cassini to see lightningbecause the planet is very bright and reflective. Sunlight that shines off of Saturn'senormous rings makes even the night side of Saturn brighter than afull-moon night on Earth.

The equinox period around August 2009 finally brought enoughdarkness needed for Cassini's cameras. During equinox, the sun shone directlyover the planet's equator, lighting the rings edge-on only, leaving the bulk ofthe rings in shadow.

The movie and radio data collected by the scientists suggestextremely powerfulstorms, with lightning that flashes as brightly as the brightest super-boltsof lightning on Earth, according to Andrew Ingersoll, a Cassini imaging sciencesubsystem team member at Caltech.

"What's interesting is that the storms are as powerful? or even more powerful ? at Saturn as on Earth," Ingersoll said."But they occur much less frequently, with usually only one happening onthe planet at any given time, though it can last for months."

The first images of lightning on Saturn were captured inAugust 2009, during a storm that lasted from January to October 2009, longerthan any other observed lightningstorm in the solar system.

The frames in the video were obtained over a period of 16minutes on Nov. 30, 2009. The flashes lasted less than one second. The imagesalso show a cloud as long as 1,900 miles (3,000 kilometers) across, with theregions illuminated by the lightning flashes reaching approximately 190 miles(300 kilometers) in diameter.

Scientists used the width of the lightning flashes to gaugethe depth of the bolts below the cloud tops.

Lightning that strikes on Earth and Saturn emit radio wavesat a frequency that can cause static on an AM radio. The audio in the videoapproximate that static sound, based on Saturn's electrostatic dischargesignals that were detected by Cassini's radio and plasma wave scienceinstrument.

Scientists monitoring the Cassini orbiter were busy duringthis equinox period, having already observed clumps in Saturn'srings that are as high as the Rocky Mountains.