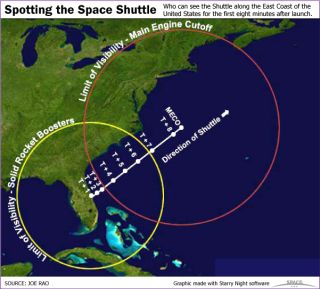 Who can see the Shuttle along the East Coast of the United States for the first eight minutes after launch. Full story.
(Image: © Karl Tate, SPACE.com)

People in the eastern United States will get a great opportunity,weather permitting, to see the space shuttle Discovery launched into orbitearly on Monday morning, April 5.

Should the launch come off on schedule, it will also give viewersa rare opportunity to see a shuttle launch during morning twilight, a veryunusual circumstance which has happened very infrequently since the shuttleprogram began in April 1981.

The shuttle is due to launch Monday at 6:21 a.m.ET from NASA?s Kennedy Space Center in Cape Canaveral, Fla. This viewing map shows the areas where it will most likely be visible to East Coast skywatchers.

This flight (STS-131) will be the 33rd to rendezvous and dockwith the International Space Station (ISS). Out of 130 previous Shuttlelaunches, 30 have occurred in complete darkness.?But only five launcheshave taken place during morning twilight ? considered to be the intervaloccurring between the break of dawn and sunrise. One launch, in August 1985,exactly coincided with sunrise at Cape Canaveral, while another in May 1996came just one minute after local sunup [photos of spaceshipsspotted from Earth].

And this upcoming launch could also be the very first one where ashuttle will take a track parallel to the Atlantic seaboard while much of theEast Coast is experiencing morning twilight conditions.

On those occasions when a shuttle has been launched in the dark ofnight, its visibility was due primarily to the bright yellow-orange glow of itsmain rocket engines. But should the upcoming launch of Discovery ? itsnext-to-last planned mission ? go off on schedule next Monday morning, itsvisibility might be enhanced by sunlight reflecting off both the orbiter andits orange external fuel tank; a rather unique occurrence!

Originallyscheduled to liftoff during early afternoon, Discovery's launch date slippedfrom March 18 to April 5 because of an unusual cold snap in Florida thatdelayed launch preparations. In addition, NASA wanted to avoid having a shuttleat the space station when the next Russian Soyuz transport arrives in early April.

Thethree new crewmembers successfully blasted off from Russia's BaikonurCosmodrome aboard a Soyuz TMA-18 spacecraft earlier today. Docking is set forearly Sunday morning, followed the very next day by the launch of shuttleDiscovery. As a consequence of the two and a half week delay, Discovery's originalearly afternoon launch time was pushed back to before sunrise.

To reach the space station, Discovery must be launched whenEarth's rotation carries the launch pad into the plane of the station's orbit.For mission STS-131, this will happen in the middle of a 10 minute launchwindow at 6:21:22 a.m. ET on Monday, April 5. Although at Cape Canaveralsunrise does not come until 46 minutes later, this is not considered a true "night"launch, since morning twilight will be well advanced and the eastern sky willalready be noticeably bright with the approach of sunrise, though NASAofficials have said it meets the technical guidelines for a nightshuttle launch.

But it still should be dark enough for some of the brighter starsto be visible, as well as the planet Jupiter which will be near the easternhorizon.

As has been the case with other launches to the ISS, Monday'sliftoff will bring the shuttle's path nearly parallel to the U.S. East Coast. ThisSPACE.com map shows the area oflaunch visibility.

If you're positioned near the edge of a viewing circle, theshuttle will barely come above the horizon and could possibly be obscured bylow clouds or haze.

In the southeast United States, depending on a viewer's distancefrom Cape Canaveral, Fla., the "stack" (shuttle orbiter, externaltank and solid rocket boosters) can be easily followed thanks to the fieryoutput of the solid rocket boosters. The brilliant light emitted by the twosolid rocket boosters will be visible for the first 2 minutes and 3 seconds ofthe launch out to a radius of some 510 miles from the Kennedy Space Center ? anarea covering more than three times the size of Texas.

Depending on where you are located relative to Cape Canaveral,Discovery will become visible anywhere from a few seconds to just over 2minutes after it leaves Pad 39-A.  For an example of what all this lookslike from Florida, see videoof a night launch made by Rob Haas from Titusville, Fla.,on Dec. 9, 2006 (the STS-116 mission).

After the solid rocket boosters are jettisoned, Discovery will bevisible for most locations by virtue of the light emanating from its three mainengines. Based on previous night missions, the brightness should be at leastequal to magnitude -2; rivaling Sirius, the brightest star in brilliance.Observers who train binoculars on the shuttle should be able to see its tinyV-shaped contrail.

James E. Byrd shot video of the shuttle fromVirginia after a November 2000 night launch. The bright star Sirius brieflystreaks through the scene giving a sense of scale and brightness to theshuttle's glow.

But this flight will have a unique bonus.

Three minutes and 22 seconds after liftoff, Discovery will havemoved out to a point 443 miles northeast of Cape Canaveral and will haveclimbed to an altitude of 283,536 feet (53.7 miles).? It will be here that theshuttle will be high enough to see the sun emerge from beyond the distant curveof the eastern horizon.? For those watching from Florida northeast to theCarolinas, thanks to that reflected sunlight, the orbiter and its orangeexternal tank will be shining against a still semi-dark sky and should suddenlyappear to get much brighter, perhaps even surpassing Venus in brilliance as itraces quickly across the heavens.?

For those living along the Middle Atlantic and Northeast U.S.coast, the first view of Discovery will likely be of a very bright "movingstar" moving up from the southern horizon, that might appear to graduallyfade into the background of the brightening twilight sky, since from theseregions, the angle of reflected sunlight on the shuttle will diminish as itmoves rapidly to the east-northeast.???

If the weather is clear, the shuttle should be relatively easy tosee. It will appear to move very fast; much faster than an orbiting satellitedue to its near orbital velocity at low altitudes (30-60 mi). Depending uponyour distance from the coastline, the shuttle will be relatively low on thehorizon (generally 5 to 15 degrees; your fist on an outstretched arm coversabout 10 degrees of sky. Most importantly, make sure there are no buildings ortrees to obstruct your view.?

Refer to this viewingtable for more specific sighting information:

EXAMPLE:? Assuming a launch time of 6:21:22 ET, as seen from AtlanticCity, shuttle Discovery will first become visible 5 degrees above the southernhorizon at 6:27:44 a.m. ET. Discovery will reach its highest point at 6:29:32a.m. ET, at an altitude of 8 degrees above the southeast horizon.? At thatmoment the distance between the shuttle ground track and Atlantic City will be312 miles.

The point of Main Engine Cut Off (MECO) will come 8 minutes 21seconds after liftoff, at a point 366 miles southeast of New York City. At thatmoment, Discovery will have risen to an altitude of 340,500 feet (64.4 miles),while moving at roughly 17,500 m.p.h. (mach 24.6) and should be theoreticallybe visible for a radius of about 770 statute miles.? Visibility at that point,however, will be highly dependent on your viewing location and how dark yourbackground sky is, as well as how much reflected sunlight is shining on theshuttle.? It is possible that Discovery may no longer be visible at this pointfor some, while others who might still have it in view may note a"puff" of vapor associated with the jettisoning of the external tankover the Atlantic.? Binoculars might even show the separation of the orbiterfrom the tank.

And of course, before hoping to see the shuttle streak across yourlocal sky, make sure it has left pad 39-A at the Kennedy Space Center!

Assuming a good load for its fuel cell system, Discoveryshould be able to make a number of launch attempts over a nine-day time span,extending to April 14. Should the launch be scrubbed, the liftoff time willoccur 22 to 27 minutes earlier per day. If, for example, the launchis scrubbed on April 5, liftoff on April 6 is scheduled for 5:58:45a.m. ET; on April 7 it's 5:33:03 a.m. ET.

Any delay would push the launch into darker skies. On April 6,liftoff would come just 12 minutes after the start of astronomical twilight forCape Canaveral, while on April 7 liftoff would come 12 minutes before the firstlight of dawn, officially making this a nighttime launch.

Should weather or technical issues delay the launch until April14, liftoff would then be scheduled for 2:45:50 a.m. ET.

After this mission, there will be just threemore shuttle flights left before the shuttle program finally comes to aclose (tentatively set for September 2010).

One of these is scheduled to be launched during earlyafternoon, and one during the midday hours. Interestingly, however,STS-134, which will be the final flight of shuttle Endeavour, is currentlyscheduled for a July 29 launch just a little over an hour aftersunrise.

But if weather or technical constraints were to delay thatmid-summer launch by about a week, then it too would be launched prior tosunrise and the first light of dawn, also making it a night launch.