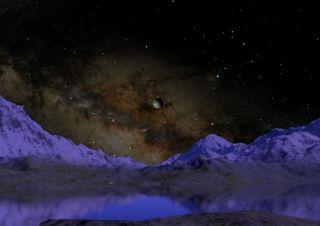 The "disappeared" moon rises at 3 a.m. over a mountain lake in Colorado later this week.
(Image: © Starry Night® Software)

At this time of the month,some people are often puzzled by the disappearance of the moon.

Last night, there was abig brightfull moon looming on the eastern horizon at sunset. But tonight it seems atfirst to be gone. Then, a little later in the evening, it rises in the east.Tomorrow night, it will put in an even later appearance.

The moon is actuallymoving along in its orbit around the Earth. This has the effect of moonrisebeing approximately 50 minutes later each night.

By the weekend, the moonwon?t be rising until about 3 a.m. ET in the morning.

The key to observing themoon if you don?t want to stay up all night is to look for it first thingin the morning.

The waning moon is bestobserved right after sunrise in the morning sky. Look in the southern sky (ifyou?re in the northern hemisphere) and there it will be, riding high in a clearblue sky (weather permitting).

Some people seem puzzledas to how the moon can be seen in daylight. The sun shines during the day andthe moon shines at night, right?

Wrong. Nearly every day ofthe month, the moon spends about half the time in the daytime sky. The onlyexception is the one night in the month when the moon is full. That?s the onlynight when the moon is exactly opposite the sun in the sky [more moonimages].

The rest of the month, thesun and moon share the sky at least part of the day. When the moon is new, itis so close to the sun that it can?t be seen at all, except when it gets tooclose, and actually eclipsesthe sun.

So, next week, have a lookfor the daytime moon any nice clear morning.