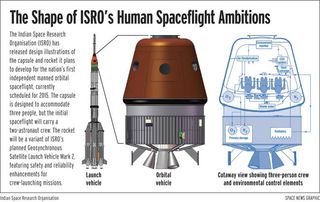 The Indian Space Research Organization (ISRO) will receive57.78 billion rupees ($1.25 billion) for 2010 — a 38 percent increase over lastyear — under the budget approved Feb. 26 by India's Parliament.

ISRO's mannedspace program will receive 1.4 billion rupees for the new budget year,which begins April 1, to continue development of a space vehicle designed tocarry two astronauts to a 250-mile (400-kilometer) orbit and return them safelyto Earth, according to ISRO documents.

Other ISRO budget highlights include:

• 2.5 billion rupees for continued development of aso-called semi-cryogenic rocket that will use kerosene fuel.

• 1 billion rupees for Chandraayan-2, a follow-on to India'srecently completed lunarorbiter mission that will be conducted jointly with Russia.

• Continued funding for Aditya, a sun-observing satelliteslated for launch in 2012 and billed as India's first space-based solarcoronagraph.