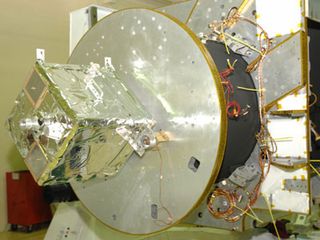 Chandrayaan 1, India's first deep space mission, released its Moon Impact Probe for a suicide nosedive to the lunar surface, it was announced on Friday.

The event reportedly generated images and data, but those have not been released yet.

The Moon Impact Probe weighed 64 pounds (29 kilograms) and rode atop the deck of the main orbiter. The impactor was set to be released once the spacecraft reached its final circular orbit 62 miles (100 kilometers) above the moon.

It was to "signify the entry of India on Moon," an ISRO official told the Press Trust of India.

The main objectives of the probe were to explore the lunar surface at close range ? while on the way down ? and to test out technologies for future soft landing missions.

The probe had three main payloads:

The $80 million mission, which includes three instruments supplied by the European Space Agency, is a precursor to the planned Chandrayaan 2, which will carry a Russian rover and a lander and is currently slated to be launched between 2010 and 2012.