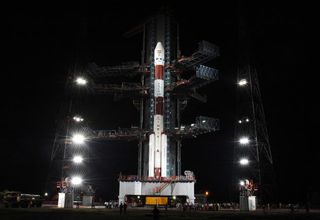 BANGALORE,India - Five years after being formally approved and following a series of latedelays, India?s first-ever planetary mission is on track to launch the morningof Oct. 22 Local Time, with arrival in lunar orbit scheduled to occur 17 dayslater.

The Chandrayaan-1moon mission, featuring Indian, European and U.S. instruments, had been scheduledto launch in April but suffered setbacks including late-arriving payloads andintegration issues. But officials with the Indian Space Research Organisation (ISRO),who unveiled plans for the orbiter in 2000 with a target launch date of 2008,are confident those issuesare behind them.

?Thespacecraft reached the launch site Sept. 30 after completing thermal vacuum,vibration and acoustic testing in Bangalore,? ISRO spokesman S. Satish saidOct. 15. Integration with the launcher was completed Oct. 14 and at press timethe rocket was slated to be moved to the launch pad Oct. 18, he said.

If all goeswell, Chandrayaan - which means moon vehicle in Hindi - will join two other spacecraftthat reached lunar orbit roughly one year ago: Japan?slarge Kaguya, or Selene, mission, which launched in September 2007, and China?sChang?e 1, which launched in October 2007. NASA?s Lunar Reconnaissance Orbiteris slated to launch in February, meaning that four spacecraft, each built by adifferent country, could be in lunar orbit simultaneously.

Built at acost to ISRO of some $87 million, the fully fueled Chandrayaan-1 will weigh2,874 pounds (1,304 kg) when it lifts off from the Satish Dhawan Space Centreon Sriharikota Island off India?s east coast. After a countdown lasting 52 hours,the probe will lift off tomorrow at 6:20 a.m. Local Time (Tuesday evening Oct.21 EDT) aboard a modified version of ISRO?s Polar Satellite Launch Vehicle, orPSLV.

The probewill be India?s first to leave Earth orbit, something that will be accomplishednot by a direct transfer typical of lunar missions but rather through a seriesof Earth orbit-raising maneuvers. In direct transfer missions, a spacecraft isplaced into a parking orbit around Earth before on board propulsion systemsgive it a substantial velocity boost to place it into a lunar transfer orbitwith an apogee of 238,550 miles (384,400 km) - roughly the moon?s average distancefrom the Earth.

?Directtransfer would have required an additional stage to PSLV,? said V. Adimurthy, ascientist at ISRO?s Vikram Space Science Centre, where the rocket was built.

?It takesabout 11 days after launch to establish the lunar transfer trajectory,? Satishsaid.

?If thelaunch takes place on Oct. 22, the spacecraft is expected to enter the100-kilometer lunar orbit on Nov. 8,? Satish said.

TheChandrayaan-1 spacecraft itself is relatively small, measuring about 5 feet (1.5meters) on a side with a dry mass of only 1,153 pounds (523 kg). Itcarries 11 scientific payloads, including six provided by other nations: two fromthe United States, and one each from Britain, Sweden, Germany and Bulgaria.

The 64-pound(29-kg) impact probe will be released from the orbiter over a selectedsite once the spacecraft enters its final orbit, Satish said. During its 18-minutedescent, the impact probe - with India?s national flag painted on its shell - willtake images of the lunar surface. Its impact will kick up a cloud of dust thatwill be observed and analyzed by the instruments on the orbiter.

In additionto mapping lunar surface features and topography, the instrument suite willstudy the Moon?s elemental and mineralogical composition - in part by measuringreflectance from solar flares that are expected to rise in frequency andintensity over the next few years. ?Water-ice, if present, can be detected byseveral of these instruments,? ISRO said on its Web site.

?Simultaneousphoto-geological, mineralogical, and chemical mapping will enable us toidentify different geological units, which will test the early evolutionary historyof the Moon,? Bhandari said.

He addedthat the simultaneous presence of four Moon probes will enable coordinatedstudy. For example, he said, one mission may benefit from data collected by another;or one probe could observe as another crashes into the surface after completingits mission.