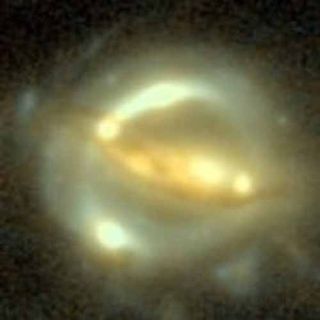 The B1608+656 galactic system blocks a distant galaxy and causes the distant galaxy's light to detour around the blockage. But instead of taking a single path, light can bend around the object in one of two, or four different routes, thus doubling or quadrupling the amount of information scientists receive. As the brightness of the background galaxy nucleus fluctuates, physicists can measure the ebb and flow of light from the four distinct paths.
(Image: © Sherry Suyu of the Argelander Institut für Astronomie in Bonn, Germany)

The size and age of the universe, as well as how fast it isexpanding, has been confirmed with a new, precise method that uses galaxies aslenses to look at other galaxies.

The new measurement confirmed the age of the universe as13.75 billion years old, to within 170 million years, and also confirmed thestrength of darkenergy, which is responsible for the accelerating expansion of theuniverse.

When looking out at the cosmos, it can be difficult forscientists to distinguish between a very bright light far away and a dimmersource much closer to Earth.

To circumvent this problem, a team of researchers used atechnique called gravitationallensing to measure the distances light traveled from a bright, activegalaxy to the Earth along different paths, along with data from the HubbleSpace Telescope. Researchers can use the observations to infer not just how faraway the galaxy lies but also the overall scale of the universe and somedetails of its expansion.

The size of the universe is often expressed byastrophysicists in terms of a quantity called Hubble'sconstant, which describes the rate at which galaxies in the universe areflying away from each other.

"We've known for a long time that lensing is capable ofmaking a physical measurement of Hubble's constant," said team member PhilMarshall of the researchers at the Kavli Institute for Particle Astrophysicsand Cosmology (KIPAC). But gravitational lensing had never before been used insuch a precise way.

The most widely accepted value for the Hubble constant rightnow is 72 kilometers per second per megaparsec, obtained by the Hubble SpaceTelescope.

"Gravitational lensing has come of age as a competitivetool in the astrophysicist's toolkit," Marshall said.

Gravitational lensing works like this: When a large nearbyobject like a galaxy blocks a distant object, such as another galaxy, the lightcan detour around the blockage.

But instead of taking a single path, light can bend aroundthe object in one of two, or four different routes, thus doubling orquadrupling the amount of information scientists receive. As the brightness ofthe background galaxy nucleus fluctuates, physicists can measure the ebb andflow of light from the four distinct paths.

Though researchers do not know when the light left itssource, they can still compare arrival times.

?Marshall likens it to four cars taking four differentroutes between places on opposite sides of a large city. And like automobilesfacing traffic snarls, light can encounter delays, too.

"The traffic density in a big city is like the massdensity in a lens galaxy," Marshall said. "If you take a longerroute, it need not lead to a longer delay time. Sometimes the shorter distanceis actually slower."

The gravitational lens equations account for all thevariables such as distance and density, and provide a better idea of when lightleft the background galaxy and how far it traveled.

The technique is now more precise, astronomers say, and somore accurate values for Hubble's constant and the uncertainty of the value ofthat constant can be reliably determined.

The research will be detailed in a March issue of TheAstrophysical Journal.