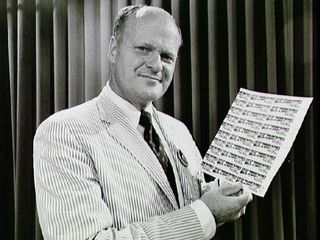 Artist Robert McCall, whose visions of thepast, present, and future of space exploration have graced U.S. postage stamps,NASA mission patches, and the walls of the Smithsonian, died on Friday of aheart attack in Scottsdale, Arizona. He was 90.

Once described by author Isaac Asimov as the"nearest thing to an artist in residence from outerspace," McCall's paintings first attracted the public's attention in the1960s on the pages of LIFE, illustrating the magazine's series on the future ofspace travel. He expanded on that theme at the invitation of director StanleyKubrick, who had McCall paint the advertising posters for his seminal 1968science fiction film, "2001: A Space Odyssey."

Since then, many more have encounteredMcCall's space art through canvasesboth very large and very small.

Perhaps his most famous piece, the six-story"The Space Mural — A Cosmic View" greets visitors to the National Airand Space Museum in Washington, D.C. Painted over the course of eight months in1976, McCall's depiction of the creation of the universe leading to astronautswalking on the moon is seen by an estimated ten million annually.

Others of McCall's large murals can be foundat NASA's Johnson Space Center in Houston, Texas, at the Dryden Flight ResearchCenter in Lancaster, California, and at the Kansas Cosmosphere and Space Centerin Hutchinson. A number of his paintings decorated the walls of the formerHorizons pavilion at Walt Disney World Resort's Epcot in Florida, and oneremains on display at the entrance to the park's iconic "SpaceshipEarth" attraction.

At the other end of the size spectrum but noless popular, McCall created the art for 21 space-themed U.S. postage stamps,ranging in subject from the moon landings to the unmanned probes sent to Marsand Jupiter. His design for a commemorative marking the Apollo-Soyuz TestProject adorned the largest stamp published in the United States.

In 1981, McCall designed eight stampscelebrating STS-1, the first flight of the space shuttle. At mission commanderJohn Young's request, McCall also designed the insignia that Young and BobCrippen wore aboard Columbia for the two-day mission.

It was through the stamps and patches that hecreated did McCall ultimately see his artwork merge with their subject matterand enter space. The Apollo 15 astronauts flew his "Decade ofAchievement" two-stamp pane to the Moon, and the last men to walk on thelunar surface did so while wearing an Apollo 17 mission patch designed byMcCall.

"It is something I continue tocovet," shared McCall in a 2006 interview withcollectSPACE.com."It was wonderful to really see this emblem that I designed on the Moon,in real time from Mission Control."

In 1973, at the personal request of flightdirector Eugene Kranz, McCall designed the original insignia to represent theMission Control teams.

McCall also created patches for the third andfifth shuttle crews, as well as the first to dock with Russia's Mir spacestation. His most recent patch was designed forback-up spaceflight participant Barbara Barrett, a family friend, in 2009.

Continue reading at collectSPACE.com aboutMcCall's path to becoming a NASA artist and his view on the future of spaceflight.