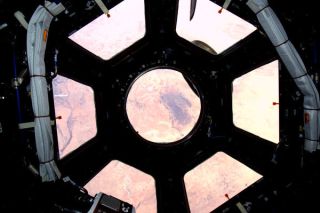 Japanese astronaut Soichi Noguchi took this view from inside the cupola just after its windows were first opened on Feb. 17, 2010. The cupola's window shutters are open and the Sahara desert is visible below.
(Image: © Twitter via NASA)

Astronauts in space are basking in what they described as "absolutely spectacular" views of Earth after cranking open the shutters on the International Space Station's new window-covered observation dome for the first time.

The shutters were opened early Wednesday after an overnight spacewalk by Endeavour shuttle astronauts Robert Behnken and Nicholas Patrick, who unwrapped and unlocked the new space observation deck, called the Cupola, for their crewmates inside.

It was space station commander Jeffrey Williams of NASA who said the first view was spectacular.

"This has to be the largest window onboard and when we have the others around it open it will give us a view of the entire globe," he said. "Absolutely incredible."

The astronauts were understandably eager to take their first glimpse out the Cupola's windows. They opened its biggest one first in a test. It's a huge, 31-inch (80-cm) window looking down on the Earth, making it the world's largest space window ever built.

They didn't even wait until the spacewalk was over to open all seven windows at one time and start snapping photos of Earth. The astronauts could easily be seen floating inside the Cupola in views from video cameras outside the space station.

"Hey great job raising the curtains on the bay window to the world," Endeavour astronaut Kathryn "Kay" Hire told the spacewalkers as they finished their work.

Soon after, Japanese astronaut Soichi Noguchi posted the first photo of Earth as seen from the Cupola on his Twitter page. It showed the Sahara Desert 220 miles (354 km) below the station.

"Let there be light! Cupola windows open toward Sahara desert. Priceless!" wrote Noguchi, who tweets as Astro_Soichi and has lived on the station since December.

The spacewalkers removed insulation blankets and bolts locking the window shutters during nearly six hours of outside work. They said they hoped to take their own look out the new windows after returning inside.

At one point, shuttle pilot Terry Virts opened a window shutter and saw Patrick floating outside in his spacesuit. The two astronauts happily said hello to each other.

"You guys have come a long way to see each other across such a short distance," Endeavour astronaut Stephen Robinson said from inside the shuttle.

Virts promised to send video recorded of the views out the new windows to Mission Control later today.

"I know we talk about the view a lot, but this one takes your breath away," he told Mission Control.

Shuttle flight director Bob Dempsey compared the view to that of the fictional "Star Wars" spaceship the Millennium Falcon, and said watching the Cupola open was one of the most exciting things he's ever seen.

"The astronauts, who are accustomed to views that you and I can't really describe, were moved to tears when they looked out the windows of the Cupola for the first time tonight because the panorama is just spectacular," Dempsey said after the spacewalk.

Windows on the world

The Cupola is perched on the bottom of the space station's new Tranquility module, where it promises to give astronauts inside unprecedented panoramic views of Earth and space. Station astronaut Timothy "T.J." Creamer, also of NASA, has called it the "window of all windows."

Both Tranquility and the Cupola were delivered by the shuttle Endeavour. With them, the space station is now 98 percent complete and weighs nearly 800,000 pounds (362,873 kg). The $100 billion space station is the product of 16 different countries and has been under construction since 1998.

The Cupola's locking bolts were in place to keep its shutters from shaking loose when Endeavour launched toward the space station on Feb. 8. NASA wanted to test the shutters while Behnken and Patrick were outside just in case one got stuck.

Tuesday night's spacewalk began at 9:15 p.m. EST (0215 Wednesday GMT). It is the third and final spacewalk for Endeavour's six-astronaut crew.

The station's new $27.2 million viewport is about 10 feet (7 meters) wide and 5 feet (1.5 meters) deep. It has six windows arranged around the big, central round portal. When all the shutters are open, it resembles an open metal flower.

"It may be a small space station module, but good things come in small packages," Patrick said.

The shutters protect the windows from scratches or other damage caused by space debris or micrometeorites. They are opened by turning a knob inside the Cupola, which drives the crank to pop open the shutter. When the Cupola isn't in use, the window shutters will stay closed.

"There's not a lot of debris out there, but it wouldn't take much for a small piece of debris coming through and damaging these windows," Dempsey has said.

The windows are reinforced, but NASA wants astronauts to be extra careful to protect them from damage. After all, the view they offer won't be just for leisure.

When all the windows are open, they give astronauts a clear, 360-degree view of the space station's exterior so that they can see with their own eyes when new spacecraft approach and while using the outpost's robotic arm. The station's robotic arm control systems will be moved inside the Cupola on Thursday.

The Cupola windows were delivered with the station's new $382 million Tranquility room by the shuttle Endeavour, which launched last week on a two-week trip to the orbiting laboratory. They were built in Italy by the European Space Agency and are the last major NASA additions for the space station, space agency officials have said.

Mission Control roused Endeavour's crew Tuesday afternoon with the song "Window on the World" by Jimmy Buffett, just to set the tone for their overnight work. NASA is also expecting a flood of photographs to come from the Cupola's windows.

"I anticipate a lot of photos," said station flight director Mike Lammers before the spacewalk. "Probably so much that the folks responsible for bringing them down from onboard are going to be overwhelmed."

In addition to unlocking the station's window shutters, Behnken and Patrick connected power and data cables to an old docking port that was moved to the outboard end of the Tranquility room late Monday. They also put the finishing touches on ammonia cooling hoses on the Tranquility node, added handrails to the new module and performed some other chores.

The spacewalk was the 140th dedicated to space station construction and the third for Endeavour's astronaut crew. In all, Endeavour's spacewalking team spent 18 hours and 14 minutes working on the station's new Cupola and Tranquility module.

The spacewalk was also the third for Patrick (all on this flight) and the sixth for Behnken, who finished with a total cumulative spacewalking time of 37 hours and 33 minutes.

While NASA's current mission is going smoothly, the space agency announced Tuesday that it has delayed the next shuttle launch aboard Discovery until April 5. Cold weather at NASA's Kennedy Space Center in Florida has held up work to attach Discovery to its external tank and solid rocket boosters needed for launch.

Endeavour is slated to depart the space station late Friday after a nine-day stay. The shuttle and its crew are scheduled to return to Earth Sunday night.