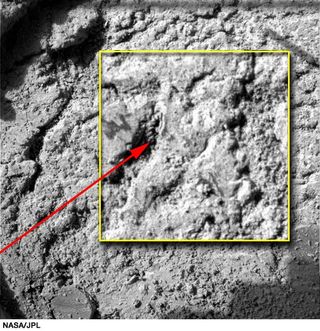 Opportunity Mars rover snapped this image of an odd-looking feature at Meridiani Planum, looking like a Rotini pasta. To date, that shape has not been duplicated during months of Rock Abrasion Tool and science instrument operations. Image
(Image: © NASA/JPL)

With each passing day, those peppy robots on Mars - Spirit and Opportunity - churn out extraordinary new views of the red planet. Each robot is over a year in operation, relaying a steady stream of eye-catching photos.

And more than once, the Mars machinery has sent back an image that stirred up a promising eureka moment: Finding evidence for life on that remote world.

A case in point, during a recent run of Spirit in the Columbia Hills, the robot used its arm-mounted devices to poke and probe a select Mars rock. One piece of hardware -- the Rock Abrasion Tool, known better as the RAT -- is on hand to expose fresh martian rock.

The RAT utilizes a single diamond matrix wheel to scrape the rock surface. It does this ever so slightly and progressively to achieve a wanted depth. The abraded surface is actively swept clean by a brush to prepare it for scientific examinations.

Once the rock was worked over, Spirit's Microscopic Imager went in for close-up looks at the results.

And within the images, an odd feature could be seen, seemingly a pattern of something more biological than just rock.

"The first impression I got -- based on the morphology alone -- was how similar it looked to a common terrestrial foliose lichen," said Barry DiGregorio, a research associate for the Cardiff Centre for Astrobiology in the United Kingdom. "On Mars, however, as we all have learned from past experience, looks can be deceiving," he told SPACE.com.

DiGregorio said he was struck by the fact that the entire rock outcrop on which this feature is found looks in places like it has a moss-like texture to it. "In the absence of any spectroscopic data, it's difficult to say for certain what it is. The radial pattern may turn out to be similar to spherical dendritic iron oxides," he added.

Indeed, looks can be deceiving, concurs Stephen Gorevan, payload lead for the RAT on the Mars Exploration Rover project. He's also chairman of Honeybee Robotics in New York, the cutting-edge group that designed, developed, and operates the RAT.

Honeybee Robotics creates robots, flight subsystems, automated drills and other machines destined for work on Earth, Mars, and beyond.

Gorevan told SPACE.com that the Spirit snapshots in question show a portion of a RAT brush mosaic, along with the actions of the rover's Mössbauer Spectrometer. That device carries out a detailed analysis of a rock once put flush into position on the object of interest.

"While I have not traced the precise path and geometry, it is suspected that the central 'fuzzy' patch is due to the Mössbauer placement onto a portion of the mosaic where brush bits had accumulated," Gorevan noted.

The Mössbauer contact plate picked up the brushed bits by a sticking action that Gorevan and others on the rover team have seen before. A related event happened earlier in the robot's mission, he explained.

"The Mössbauer left a screw mark in some dust and it was assumed that there was a ratting and some very weird structure had been uncovered. Like I said, I can't prove my hypothesis yet, but I would bet the farm that it was something close to what I am indicating," Gorevan said.

Gorevan said he would be thrilled to come across a juicy mystery that might have been encountered or uncovered by the RAT. "And I understand the chatter about this because I had to respond to a number of inquiries early on in the mission that saw something like this that we were able to clearly trace to the RAT and the Mössbauer."

"While I can't offer a precise and definitive reconstruction yet as to exactly how it happened, I just can't get excited about this one. I am confident it had something to do with instrument contact with the surface," Gorevan concluded.

But while this "Spirited" case of an odd imprint may be closed, another rover find remains puzzling.

Early in its mission at Meridiani Planum, the Opportunity Mars rover shot back a Microscopic Imager photo that included a feature shaped like a Rotini pasta. At the time, its profile sparked discussion both inside and outside of the NASA Mars Rover Exploration team.

"I am surprised I do not hear any more commotion about the good old 'rotini' shape from Meridiani in the early part of the mission," Gorevan said. "We have not yet been able to duplicate that shape with the RAT or any Mössbauer Spectrometer or Alpha Particle X-ray Spectrometer contact mechanisms."

But Gorevan hastened to add: "That's infinitely far from saying it is of biologic origin, but it is proving resistant to duplication."

Looking out for features

Gorevan and his team have performed no direct tests attempting to duplicate the "rotini" feature.

"Frankly I do not know how to construct such a test," Gorevan explained.

"What we are doing is looking out for features that might be embryonic or very old forms of the rotini feature that might have been made with the RAT. More attention will be paid on this effort toward examination of terrestrial specimens," Gorevan noted.

No one on the Mars science team has made a request for Gorevan and his associates to try to devise some way to duplicate a rotini feature with their hardware. "And right now we have our hands full in keeping up with this lovely mission that never ends," he said.