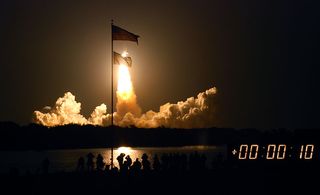 Space shuttle Endeavour pierced the pre-dawnsky over Florida on Monday, creating an artificial sunrise for what is expectedto be the last time. With just four shuttle missions remaining after thecurrent STS-130 flight, all are currently scheduled to launch during the day.

Endeavour set the sky ablaze at 4:14 a.m. EST,starting its 13-day mission to the International Space Station (ISS) to deliverthe TranquilityNode 3module and its adjoining Cupola observation portal. The launch was delayed aday due to a low cloud ceiling over Kennedy Space Center.

"It is going to light up the groundaround," he described. "You should be able to see it from as far asthe Carolinas, I think, if the skies are clear.

"It should be a wonderful sight,"Zamka said.

And so it was, said launch director MikeLeinbach during a post-launch press conference.

"It lit up the Kennedy Space Center. Iwas looking out the windows of the control center and then looking down at theground to see how bright it [got], and that's a special, special view,"Leinbach described, adding that he saw it through two minutes into flight, whenthe twin solid rocket boosters separated.

"Then it disappeared behind some cloudsand I got kind of disappointed, but then it broke out of those clouds and thatwas when I was able to see it all the way out to seven minutes in flight, offof Cape Hatteras," he added. ?

That night-assisted sight has been somethingof a rarity over the past 29 years of space shuttlelaunches.Out of the 130 missions flown to date, only 34 have taken to the sky aftersunset and before sunrise.

Though night launches do deliver asensational view, their scheduling is not influenced by their spectacle.Rather, it's orbital mechanics that dictates the time of day ... or night.

Endeavour's mission is to rendezvous and dockwith the ISS, which requires the two spacecraft to align in orbit. To do so, asNASA spokesman Mike Curie explains, the two need to align on Earth, too.

"It has to do with the phasing of theorbit and the fact that as the space station rotates around the Earth, itpasses over different points of the Earth each orbit," he said. "Theshuttle launches when the station is in the same orbital phase with KennedySpace Center."

NASA could just target dates when thatalignment occurs during the day -- or night -- as desired, but the agency has amore important concern: launching missions when they are ready to fly.

"Soon as the crew is trained and thevehicle is ready, we want to launch," continued Curie, "so weestablish a date and then we look for what time the space station is going tobe in the orbital plane on that day, and on this particular day [for Endeavour],it happens to be in the middle of the night."

For missions launched prior to the spacestation, or which were headed elsewhere, the same reasoning applied, just fordifferent orbital targets.

Night flights by the numbers

The first shuttle night launch took place onAug. 30, 1983 at 2:32 a.m. EDT as Challenger began the STS-8 mission. Insteadof rendezvousing with something already in orbit, the mission was to deploy anIndian telecommunications satellite, which tracking requirements dictated a particularorbital plane.

The STS-8 crew, led by commander Dick Truly,prepared for the night flight by training in darkened simulators but it turnedout to be for naught.

"It was like the inside of abonfire," reported the mission's pilot Dan Brandenstein of the lightingexperienced inside the crew cabin during liftoff.

Truly, who previously piloted the shuttle'ssecond mission, a day launch, compared his earlier ascent with STS-8's.

"The light from the [two side-mounted]solid rocket motors was about 500 times more than I remember on STS-2," hetold flight controllers.

STS-8 marked the only night launch forChallenger, which was lost in flight three years later on STS-51L.

Columbia, the first orbiter to fly, loggedthree of the shuttle program's 34 night launches, including the STS-109 flightto service the Hubble Space Telescope. It too was lost in flight on its verynext mission, STS-107 in 2003.

The most night launches were logged byorbiter Atlantis at 11 flights starting with STS-61B in 1985 through STS-104 in2001.

Of the four launches left for the shuttleprogram, STS-134 -- the last flight of Endeavour -- has the greatest chance ofslipping into the night. Were weather or technical issues to delay that Julylaunch by about a week, then its liftoff would occur before sunrise.

For now though, STS-130 is the last of thenight flights.

"For the last night launch, it treatedus well," expressed Leinbach. "I think everybody appreciatedit."

Click through to collectSPACE.com tosee a listing of all 34 space shuttle night launches.