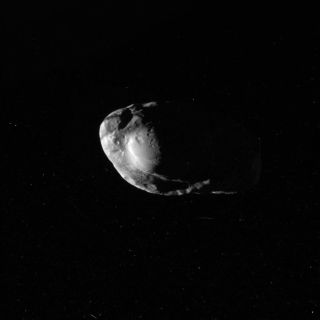 This unprocessed image of Prometheus was taken by Cassini on Jan. 27, 2010. The image was taken in visible light with the Cassini spacecraft narrow-angle camera. The view was obtained at a distance of approximately 36,000 kilometers (23,000 miles) from Prometheus.
(Image: © NASA/JPL/Space Science Institute)

Apicture of the moon Prometheus was taken from a distance of about 23,000 miles(36,000 km). Prometheus is a potato-shaped satellite is about 63 miles (102 km)long. It is embedded inSaturn's rings.

Dione'saverage surface temperature is minus 303 Fahrenheit (-186 Celsius). It iscovered by smooth plains and not too many craters ? all a sign ofcryovolcanism, or an outpouring of icy liquid from the interior.