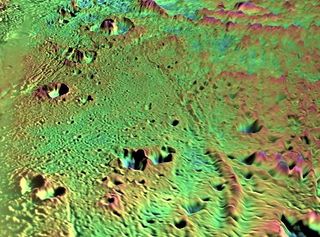 A perspective view over volcanic terrain seen in a new digital elevation model, with ridges in foreground and large impact basin in background. The elevations are exaggerated for effect. Red is high and blue is low.
(Image: © Paul Schenk/LPI, NASA)

Saturn's icy moon Dione may have much in common with its active sibling Enceladus, new research using Cassini spacecraft data has revealed.

These plains are the hallmark of cryovolcanism, which manifests itself as an outpouring of icy liquids from a moon's interior.

The DEMs used by Schenk and Moore reveal Dione's cryovolcanic plains to be higher than the surrounding terrain, suggesting they may have been emplaced in a high viscosity flow similar to terrestrial glaciers sometime within the last 2 billion to 4 billion years.

Cryovolcanism requires a heat source to drive liquids to the surface. At present the mechanism for this heat engine is not fully understood but the two leading contenders are radioactive decay and gravitational flexing.

"As far as the source of the heat, well that's the big question. It is clear that some of the craters (on Dione) have been severely modified by high heat flow, not unlike parts of Enceladus. Perhaps these satellites (Dione and Enceladus) were very hot to begin with and had continued tidal heating to keep them warm," Schenk told SPACE.com.

This tidal heating of these moons interiors would be caused by Saturn's strong gravitational pull as well as help from Dione and Enceladus' orbital resonance; Enceladus completes two orbits of Saturn for every one achieved by Dione.

Gravity pulls on the moons from different angles during their orbits, physically squashing and squeezing their overall shapes.

The same flexing mechanism can be seen if you bend a paper clip back and forth, it heats up. On Enceladus the internal heat results in water-venting geysers at the south pole. Dione is further from Saturn's gravitational grasp and somewhat analogous to the paper clip's cooler end.

Dione and Enceladus could be even more alike according to recent research led by Jared Leisner of the University of California, Los Angeles. Leisner proposes that Dione, like Enceladus, may also be venting material into space, albeit at a modest 6 grams a second.

Although 6 grams per second is more than would be expected if Dione were inert, it is paltry when compared to the gushers on Enceladus that vent a few hundred kilograms a second. This difference in output may hint at an alternate venting mechanism.

"Maybe some residual heat is driving off water from the surface (of Dione) at a slow rate. This seems at least plausible," Schenk said.

Any hopes pinned on obtaining images of geysers on Dione have so far been dashed. Yet like Enceladus, much of Dione's surface is riven with fractures, the evidence of multiple tectonic upheavals. So could Dione possess its own less vicious take on Enceladus' water spewing clefts known as 'tiger-stripes'?

"Dione doesn't have a direct analog to tiger-stripes, although the northern area has been in darkness since 2004. Mapping is still in progress and Dione will definitely be a priority target for at least one close pass during the extended mission," Schenk said.