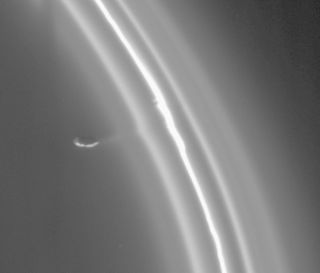 Saturn's moon Prometheus appears to steal material from the planet's F-ring, which itself is actually divided into several ringlets.
(Image: © NASA/JPL/Space Science Institute)

New images from the Cassini spacecraft reveal undulating kinks in one of the rings and theft of ring dust by a moon. The kinks are seen in greater detail than ever before and the thievery has been photographed for the first time.

Prometheus is likely behind it all.

The material in Saturn's ring -- ice and rock from the size of dust to mountains -- orbits the planet in a flat plane divided into several rings. In the F ring, kinks travel along the orbital path, looking a bit like moving bumps in a road.

Scientists have speculated in the past Saturn's moon Prometheus creates the kinks by pulling material from the F ring and temporarily putting batches of the stuff on a slightly different path.

That view is bolstered by an image that appears to show a faint strand of material running from the F ring to Prometheus, presumably lured there by the moons gravity. The potato-shaped satellite is about 63 miles (102 kilometers) long.

It would not be the first time Prometheus has stolen something. In Greek mythology, Prometheus stole fire from the Gods and gave it to the mortals.

The kinks in the F ring are seen in an animation with 44 panels taken at 3-minute intervals. The rings appear to tilt during the sequence because of the spacecraft's movement south and away from the planet during the roughly 2-hour photography session.

The images were released Friday.