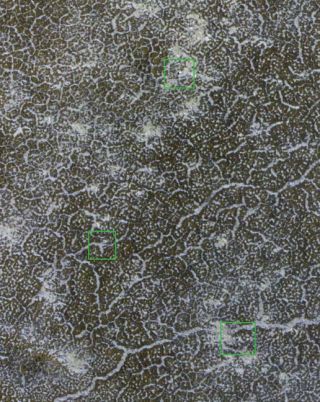 This story was updated on Jan. 22.

The first attempts tolisten for beeps of life from NASA?s long-frozen Phoenix Mars Lander have foundonly silence, though scientists aren?t holding their breath.

NASA?s Mars Odysseyspacecraft fle over Phoenix?s landing site in the Martian arctic 30 timesthis week in the off chance that the spacecraft is still able to send a signalback to Earth. The campaign began Monday and lasted three days, but so far Phoenixremains silent.

NASA spokesperson GuyWebster at the agency?s Jet Propulsion Laboratory (JPL) in Pasadena, Calif.,said that after the first few days of listening for any signal from Phoenix,Odyssey did not hear a single peep. The agency is now preparing for morechances in February and March to listen for the probe.

?It?s not a ?Hey, are youthere??? Webster told SPACE.com of the effort. ?It?s just listening.?

Phoenix has been dormantsince November 2008, when it completed a nearly five-monthmission to dig for buried water ice near the Martian north pole. The harshcold of winter on Mars, as well as the season?s dwindling levels of sunlight,sent Phoenix into a deep freeze, mission managers have said.

It is extremely unlikelythat Phoenix?s systems survived the cold, long Martian winter, but engineersequipped the probe to try to call Earth just in case it wakes up. Phoenixis programmed with a so-called ?Lazarus mode? that would reboot the spacecraftonce its power-generating solar arrays have collected enough sunlight.

With winter now turning tospring on Mars, NASA is waiting to see if enough of Phoenix?s systems survivedto allow it to phone home. The $475 million lander?s systems were not designedto withstand the severe cold of Martian winter.

Recent images of the landertaken by NASA?s Mars Reconnaissance Orbiter have showed the probe blanketedin frost on an arctic plain dotted with patches of carbon dioxide ice andbare ground.

Longer listening campaignsare planned in February and March, when the sun will have climbed higher in theMartian sky above Phoenix?s landing site. For those efforts, Odyssey willactually transmit radio signals that could be picked up by Phoenix if it hasrevived.

Phoenix landed on Mars onMay 25, 2008 and began a planned three-month mission to search for buried Martianwater ice and study the planet?s surface and polar weather. The probeconfirmed the presence of water ice just beneath the surface and lasted twomonths longer than expected.

But despite Phoenix?s accomplishments,NASA cannot listen for the probe indefinitely. Scientists have had to tradeaway observation time on Odyssey in order to dedicate the orbiter to scan forPhoenix signals.

?It?s not a freebie,?Webster said. ?There is some science that?s not being performed.?