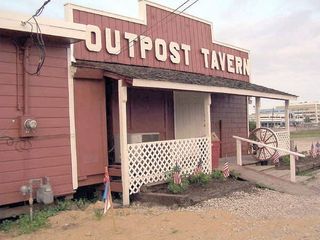 Once an Air Force barrack, the Outpost Tavern is closing in Jan. 2010 after three decades as an astronaut hangout.
(Image: © Outpost Tavern)

The Outpost Tavern, a relocated pilot barracks-turned-astronaut hangout located near the Johnson Space Center, was forcibly shut down Thursday, two weeks ahead of its already planned closure.

Midway into a schedule of farewell parties and having removed much of the space memorabilia that famously lined the bar walls, the tavern's proprietors found themselves suddenly locked out by the owner of the land on which the Outpost sits.

The Houston Chronicle's "Beer, TX" blog reported Friday that the property owner plans to move the building, give it a family-friendly upgrade, and then reopen "to preserve the Outpost... from an historical perspective," but that is at odds with Stefanie Foster, the current license owner. "If he thinks he is going to use the Outpost Tavern name... this is going to court."

Foster announced plans to close the Outpost late last year because the land on which it sits had been sold.

"Like many good things in life, sometimes 'we' are not in charge," she explained on the Outpost's Web site at the time.

The Outpost began its tavern life not as an astronaut hangout, but as a bunk for pilots.

"It began life as a World War Two Air Force barracks at the nearby Ellington Air Force Base before being moved to its present location in 1965 to serve as a barbecue shack," the Outpost's Web site explained.

In 2000, the Outpost came close to permanently shutting its doors when its grill — used to cook burgers and freshly cut fries — was deemed unsafe by the fire marshal. At the time, bills were mounting and other utilities breaking down, leaving the storied tavern's future in doubt.

But the bar resumed full service in February 2001, thanks to renovations funded by a community-driven "Save the Outpost" campaign. The campaign raised the funds required for the tavern's makeover, which, including a new grill.

The barn-like building was threatened once more in 2005 after sustaining fire damage due to an electrical system short. But the Outpost reopened a week later, again with help from the local community.

Visit collectSPACE.com for coverage of the Outpost closure, including what will become of its memorabilia.