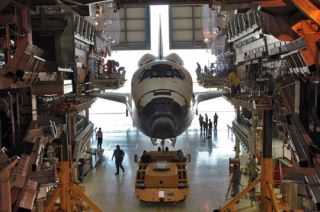 The space shuttle Discovery is shown inside its Orbital Processing Facility, a maintenance hangar used to service the spacecraft in between spacefligths, in this 2005 photo.
(Image: © NASA/KSC)

NASA has launched an extensive investigation to determine how a small amount of cocaine ended up in a space shuttle hangar at the agency's Florida spaceport.

A bag containing a small amount of white powder residue that was later confirmed to be cocaine was discovered in the space shuttle Discovery's hangar at NASA's Kennedy Space Center in Cape Canaveral, Fla. The hangar, known in NASA parlance as an Orbiter Processing Facility, is a restricted zone for shuttle workers only.

The cocaine was discovered Tuesday when a shuttle worker spotted it outside a bathroom and reported it to NASA security, NASA spokesperson Allard Beutel told SPACE.com today.

An on-site test of the bag stated it was cocaine, and subsequent follow-up tests confirmed it was the drug, he said.

"This is a rare and isolated incident, and I'm disappointed that it happened, but it should not detract from the outstanding work that is being done by a dedicated team on a daily basis," said Bob Cabana, a former astronaut and director of the Kennedy Space Center, in a statement. "We are conducting an investigation and working with center security and law enforcement officials to get to the bottom of it."

The shuttle's maintenance hangar is a restricted zone, requiring special access badges for any workers, Beutel said. About 200 NASA employees and contractors have access to the area and drug tests for all of them have been under way since Wednesday. However, the agency said Thursday that there have been no indications of anyone working on the premises while under the influence of an illegal substance.

The consequences of such actions are severe, NASA officials added.

"NASA, as well as all of our contractors, has a zero-tolerance policy for illegal drug use," Beutel said. "This is being taken very seriously."

They are investigating the drug itself, as well as any clues as to how it ended up in the shuttle hangar.

NASA takes security around its aging space shuttles extremely seriously because of safety concerns for personnel working on the spacecraft, as well as to ensure the safety and quality of work on the space vehicles. Agency officials said that extensive efforts are being made to ensure Discovery remains safe to fly its next spaceflight.

Discovery is slated to blast off from the Kennedy Space Center in March to deliver supplies and spare parts to the International Space Station.

"We have processes that will ensure the integrity of the shuttle," said Cabana. "There is no reason whatsoever to believe this incident will have any impact on Discovery's upcoming launch."

The next shuttle to fly is Endeavour, which is due to launch on Feb. 7. NASA plans to fly five final shuttle missions this year before retiring its three-orbiter fleet.

This is not the first time agency personnel have come under fire over reports of substance abuse.

In 2007, the space agency launched a different investigation after receiving two anecdotal accounts suggesting that astronauts were drunk just before their spaceflights. The investigation ultimately found no evidence of any pre-flight drunkenness among its astronaut corps.

But unlike those earlier accounts, which stemmed from years-old anecdotes, the cocaine incident is rooted firm in the present and in fact. NASA and law enforcement officials will settle the matter, NASA officials said.

"People know how serious this is and how serious people take it," Beutel said. "And it's not acceptable. That's the bottom line."