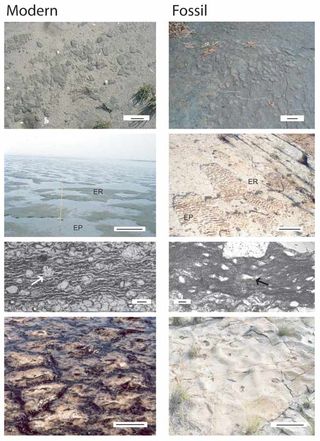 Certain environments on Earth that host life are verysimilar to places on Mars and other terrestrial planets, scientists have found.So if life can exist here, why not there?

Nora Noffke is a geobiologist at Old Dominion University inNorfolk, Virginia. She has found evidence of microbial life all over the world? in both modern and in fossil coastal areas. Bacteria that grow on beach sandform microbial mats ? organic layers that resemble carpets over the ground.Such carpets ? composed of trillions of individualbacterial cells moving actively through the sand - leave characteristictraces in the beach deposits. We can study those traces in modern beaches ofour Earth today. However, those bacterial traces also can become fossils thatrecord ancient coast lines of the past. The oldest traces of such fossils dateback to 3.2 billion years ago.

Noffke and her colleague Sherry Cady of Portland StateUniversity in Oregon recently wrote an article in the November 2009 issue ofthe Geological Society of America's journal, GSA Today, detailing howthe melding of geology and biology can teach us about the environmentsmost likely to host extraterrestrial life.

The microbes Noffke studies are simple organisms calledcyanobacteria that require no more than sunlight to grow. Organisms like this,which use the process of photosynthesis to convert sunlight to energy to liveon, are called photoautotrophs.

"They can live basically anywhere," she said."They can grow directly on pure sterile sand. They don?t need any soil.They gather all they need from the atmosphere and sunlight."

Cyanobacteria that colonize sand are pioneer organisms thathelp to pave the way for more complex plants to develop by creating usablenitrogen as a byproduct.

Since cyanobacteria have had such an easy time existing inaustere environments on Earth, there's no reason they couldn't have lived onother planets, Noffke said. Earth's solar system neighbor, Mars, seems anespecially good candidate because it is thought to have, or to have oncehad, liquid water.

"The likelihood that there were some kind of bacteriacolonizing lakes or oceans on Mars is very high," Noffke said.

If it's so likely, why haven't we found evidence of life onMars yet?

"It's just a matter of continuing to search,"Noffke said. "It just takes time to hit the right spot, to be lucky tofind something."

Noffke herself has travelled around the world looking for evidenceof cyanobacteria in new and diverse locations both along modern coastsand in ancient rocks. Even on this planet with past and present life abundant,finding colonies of cyanobacteria can sometimes take time, she said.

"I went to South Africa," she said. "It tookweeks until we found one little spot where we actually saw something in a rock.Even on Earth you have to search for a long time to find it. Bacteria aresmall, which we cannot say of a whole planet such as Mars."

Once you find them, the signs of cyanobacteria areunmistakable. The mat-like extent of the bacteria leaves a wrinkle pattern inthe rock. The crinkle structure cannot be mimicked by anything else, and isn'teasily mistaken for other processes, Noffke said.

"If you'd really like to search for life elsewhere,that?s what to look for first," she said. "That?s the most dominantstructure."

Noffke and other geobiologists help the search for lifebeyond Earth by compiling databases of the signals life leaves in its wake.Then if an intriguing pattern is ever foundin Martian rock, for example, the structure can be compared withEarthly analogues, and statistical analysis can tell whether they aresufficiently similar to prove the structure was made by living things.

"We came up with a whole catalog of what we termbiosignatures," Noffke said. "Those biosignatures are signals causedby life in an environment (past or present). Our biosignatures in the sand orsandstone are significant, simply because sand and sandstone is a very commondeposit on Mars. We send our catalogue of fossil and modern biosignatures toNASA to provide the information what to look for."

By some analyses it seems like extraterrestrial life, or atleast proof of its past existence, is a sure thing, just waiting to bediscovered in the solar system. But scientists still don't know all of thenecessary conditions for life, nor what the spark was that started life onEarth.? Until we can answer those questions, the best hope for discoveringwhether there is life on another planet is to look for evidence of it in therock record, Noffke said. Noffke?s catalogue of biosignatures should helpfuture missions identify the signs of life, if they are really there to befound.