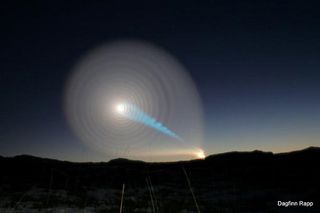 Norway residents got front-row seats to a bizarre light show: a giant spiral with a green-blue beam of light shooting from its center and lighting up the sky.
(Image: © Dagfinn Rapp.)

A spectacular spiral light show in the sky above NorwayWednesday was caused by a Russian missile that failed just after launch,according to Russia?s defense ministry.

When the rocket motor spun out of control, it likely createdthe heavenly spiral of white light near where the missile was launched from asubmarine in the White Sea. The Russian defense ministry confirmed to the Itar-Tassnews agency that a Bulava ballistic missile test had failed.

"This cloud was very spectacular, and when we looked atthe videos people submitted to the media, we quickly concluded that it lookedlike a rocket or missile out of control, thus the spiraling effect," PaalBrekke, a senior advisor at the Norwegian Space Centre in Oslo, toldSPACE.com. "I think this is the first time we have seen such a displayfrom a launch failure."

The phenomenon was seen by people all over northern Norway.

"It was a fairly stunning display, and we were reallysurprised to see it so well observed," Brekke said.

Viewers described an eerie white cloud with a piercing blue-greenbeam coming out of it.

"It consisted initially of a green beam of lightsimilar in color to theaurora with a mysterious rotating spiral at one end," Nick Banbury ofHarstad, Norway told Spaceweather.com. "This spiral then got bigger andbigger until it turned into a huge halo in the sky with the green beamextending down to Earth."

"We are used to seeing lots ofauroras here in Norway, but this was different," he said.

Before the missile test was confirmed, many people suggestedthe bright light pattern might have been aUFO. Russia finally admitted to the accident, which is an embarrassing mishapfor a rocket that had already failed six of 13 previous tests, according to theBBC.

The Bulava missile is designed to carry six individuallytargeted nuclear warheads over a range of 6,200 miles (10,000 km), the BBCreported.