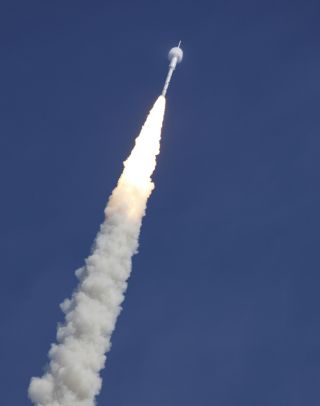 WASHINGTON ? With less than a year remaining to spend $1billion in stimulus money that the U.S. Congress gave NASA in February as partof the American Recovery and Reinvestment Act (ARRA), the space agency hasspent roughly $570 million, with nearly half of those dollars going toward itsembattled Constellation program.

So far, some $270 million in ARRAfunding has gone to Constellation, a 5-year-old effort to build newspacecraft and rockets optimized for sending astronauts to the Moon. Theadministration of President Barack Obama is reconsidering those plans andlooking at scenarios that would entail the cancellation of projects currentlyreceiving stimulus funds, including the Ares I rocket.

Ares I, a crewed launch vehicle in development at MarshallSpace Flight Center in Huntsville, Ala., has received $49 million in ARRA fundsfor development of its J2-Xupper-stage engine, according to the agency?s July 2009 stimulus operatingplan. NASA, which has until Sept. 30, 2010, to use its ARRA funds, awarded theJ2-X contract modification Nov. 2 to Canoga Park, Calif.-based Pratt &Whitney Rocketdyne, the J-2X prime contractor.

NASA also intends to award a $45 million contract to Chicago-basedBoeing Co. for Ares I upper-stage vertical assembly tooling and test equipmentat Marshall, according to the operating plan and information available on theagency?s procurement Web site. Another $15 million is slated for the A-3 teststand being built at NASA?s Stennis Space Center, Miss., to test the J2-Xengine.

In July, NASA awarded a $166 million contract using ARRAfunds to Lockheed Martin Space Systems to speed work on the OrionCrew Exploration Vehicle, which the Denver-based company is developing forlaunch atop Ares I. The contract includes: $112.5 million to acceleratedelivery of Orion?s engineering development units; $49.3 million to accelerateOrion ground-test articles; and $4.1 million to develop and test new crewsafety technologies.

Another $25 million was awarded to Greenbelt, Md.-based ASRCAerospace Corp. for development of the Ares I/Orion mobilelauncher, a large platform with a tower designed to transport, service andlaunch the next-generation booster and crew capsule. The work will be performedat the Kennedy Space Center in Florida.

?These efforts are intended to foster entrepreneurialactivity leading to job growth in engineering, analysis, design and research,and to economic growth as capabilities for new markets are created,? NASAexplained in a commercial crew and cargo white paper it sent Congress in May.

But House and Senate lawmakers told NASA to reduce theamount for commercial crew and cargo development to $90 million.

?Of the total $400 million provided for exploration, thecommittees direct that $310 million be allocated to the Constellation SystemsProgram and $90 million be allocated for Commercial Crew and Cargo activities,?House and Senate appropriators wrote in a July 20 letter to NASA AdministratorCharles Bolden. ?The committees remain concerned about the gap in time in whichthe nation does not have a U.S. vehicle to access space after the space shuttleis retired.?

NASA is on track to conduct its final space shuttle missionsin 2010, setting the stage for a potentially lengthy gap in America?s abilityto launch humans into orbit. Under NASA?s current plan, Ares I and Orion willnot be ready to make their crewed debut until 2015, although an expert panelconvened by the White House has cast doubt on NASA?s ability to make that date.

In the meantime, NASA plans to competitively award $50million of the total $90 million available for commercial crew and cargo tofund technology development intended to lay a foundation for commerciallyoperated systems capable of transporting to and from the international spacestation.

Of the $40 million in remaining ARRA funds available forcommercial crew and cargo, $24 million is set aside to speed construction ofcommercial test structures at Stennis and commercial launch infrastructure atKennedy and NASA?s Wallops Flight Facility in Virginia. Of that $24 million,NASA awarded a $9 million cost-plus-incentive-fee contract in September to theCube Corp. of Sterling, Va., a subsidiary of Southampton, U.K.-based VT Group,for construction work at Wallops.

Another $15 million of the commercial crew and cargo moneywent to space station prime contractor Boeing to accelerate development of acommon docking system for Orion and Europe?s proposed Advanced Re-entryVehicle, an evolved version of the Automated Transfer Vehicle that hauled itsfirst load of cargo to the station in 2008.

The remaining $1 million will be used to develophuman-rating requirements for commercial vehicles, according to NASA?s ARRAspending plan.

In addition to exploration programs, NASA set aside $400million in ARRA funds for science. Of the $224 million NASA has made availablefor science efforts to date, $65 million was given to Los Angeles-basedNorthrop Grumman Corp. in July to speed work on the James Webb Space Telescope(JWST). According to the stimulus spending plan, ?Without this increase,significant workforce reductions would be necessary during [fiscal] 2009,increasing cost and schedule risk.?