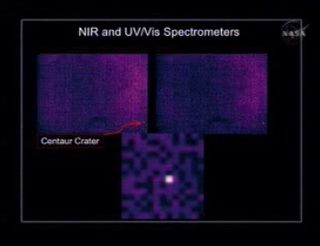 This image released by NASA early Friday, Oct. 9, 2009 shows a bright dot on the moon, a crater caused by the LCROSS mission to crash two probes into the lunar surface. The LCROSS Sheperding spacecraft took these near-infrared and ultraviolet/visible wavelengths as its Centaur rocket stage crashed. The bright dot at bottom is a zoom in on the crater signature.
(Image: © NASA TV.)

A NASA probe that slammed into the moon's south pole Fridaymanaged to spot the artificial crater carved into the pristine lunar terrainminutes earlier by its partner craft, but scientists have not yet confirmed ifthe two crashes kicked up a giant plume containing any signs of water ice ? amain goal.

But in those four crucial minutes, the five cameras and fourother instruments on the LCROSS shepherding spacecraft recordedthe flash of the rocket stage's impact and a telltale sign of the leftovercrater. What remains to be seen is whether the crashes created the vast plumeof moon dirt that scientists predicted would blast out of the crater up toheights of 6.2 miles (10 km), where it could be lit up by the sun and visibleto observers on Earth.

"We saw a crater. We saw a flash," NASA'sprincipal investigator Tony Colaprete told reporters after the $79 millionlunar impacts. "So something had to happen in between."

Colaprete said he's thrilled, rather than disappointed likesome observers not with the mission team, and had some thoughts on themissing plume.

The plume may have ejected out on an unexpected angle or notrisen high enough to be spotted by spacecraft and observers on Earth, Colapretesaid, adding that researchers will know more after an in-depth look at thedata. The crater left by the Centaur upper stage is about the same size asscientists predicted ? around 66 feet (20 meters) wide.

Colaprete and other LCROSS researchers repeatedly warnedthat the LCROSS impacts would be difficult to spot from Earth. On Thursday,they described it as seeing "blackness get less black" as the plumeexploded outward.

"I'm not convinced it's not in our data yet,"Colaprete said. "We've got to go look."

Scientists hoped to be able to scan that portion of theplume from space and Earth to determine if any water ice was present in thedebris cloud. Finding proof of buried water ice ? long suggested by thepresence of hydrogen-bearing material at the lunar south pole ? could be a boonfor NASA since it could be a potential resource for future astronauts.

Last month, scientists announced definitive proof that smallamounts of water exist elsewhere on the moon in a molecular form attachedto lunar dirt. NASA launched LCROSS ? short for Lunar Crater Observation andSensing Satellite ? in June along with a powerful orbiter to seek out evidenceof water and ice on the moon.

"The moon we thought we knew is not the moon we knownow," NASA's chief lunar scientist Mike Wargo told SPACE.com after theLCROSS crashes. "The results that we'llget from LCROSS are an important piece in the puzzle of something that ispretty darn new, the hydration cycle on the moon."

And there are already some other intriguing details puzzlingLCROSS scientists.

While no obvious sign of a debris cloud have been confirmed,spectra ? measurements taken in non-visible wavelengths of light ? indicate asignal that suggests an ejecta cloud occurred, Colaprete said. More time isneeded to analyze the spectra findings, he added.

During the four minutes between the Centaur crash and theshepherding spacecraft's impact, there was also a strong sodium signal, hintingat some interaction between the impact and the moon's tenuous exosphere ofsurface material.

"I've got to say that I was blown away by how long thislittle spacecraft lasted," Colaprete added.

The view from Earth

About 21 professional observatories and a host of amateurskywatchers stretching across the western United States, Hawaii and someoverseas sites had fair weather to spot the cloud,  but have not yetreported a visible confirmation of the plume.

"We're just looking at the very preliminary images to geta sense of the types of data that have been collected," said JenniferHeldmann, head of the LCROSS observation campaign. "But it's too early totell, to make that determination."

Some observatories have already released their early imagesof the LCROSS lunar crash. Others recorded videos of the Centaur rocket stageand the target crater Cabeus, a 68-mile (98-km) crater partly covered by apermanent shadow because of its location at the lunar south pole.

The Hubble Space Telescope and other satellites andspacecraft, including NASA's Lunar Reconnaissance Orbiter that launched withLCROSS and is currently circling the moon, are also tracking the aftermath ofthe lunar crashes.

Heldmann said that right now, NASA is awash in data from themoon crashes, especially since all the sites reported pristine viewingconditions.

"We have images. We have video. We have graphs withwavy lines that scientists love," Heldmann said. "We have somethingfor everyone."