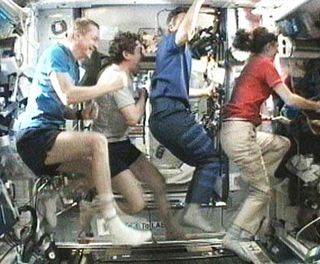 Staying fit in space is about to get easier now that astronautson the International Space Station have finished building a new zero-gravitytreadmill named after TV comedian Stephen Colbert.

Dubbed COLBERT after the host of Comedy Central's "TheColbert Report," the newexercise treadmill is now awaiting a series of tests to make sure it'sworking correctly before astronauts can begin running on it.

"It's done, and we're looking at it right now,"space station flight engineer Nicole Stott said Monday via a video link.

The $5 million space treadmill was unpacked on the orbitinglab in September, but took about 20hours for astronauts to put it together from more than 100 pieces. Four ofthe station?s six astronaut residents wore broad smiles as they piled onto thetreadmill for an impromptu ?test run? last week, but spun their legs inweightlessness since the exercise machine was not yet ready for full operations.

Officially called the Combined Operational Load-BearingExternal Resistance Treadmill (or COLBERT), the hardware got its name as a consolation prizefor Mr. Colbert, who won an online NASA contest for the naming rights to a newspace station module set to launch next (NASA opted to name the new module Tranquilityinstead).

"It's all put together in its rack but it hasn't beenchecked out yet," NASA spokesman Kelly Humphries told SPACE.com. "Theteam is working on it. They'll evaluate the data and the crew will be given a"go" or "no go" to run on it."

The treadmill is one of a suite of instruments spaceflyersuse to fight the bone loss and muscledecay associated with space travel. The COLBERT treadmill should provide abetter workout than the existing treadmill on the station, though both willcontinue to be used, Humphries said.

"They can have increased force as their foot falls asthey hit the treadmill and that?s what really helps with maintaining their bonedensity," Humphries said. "It's a commercial off-the-shelf treadmillthat?s been outfitted especially for spaceflight."

To keep from floating away while running on it, astronautswill have to attach themselves to the treadmill with elastic straps on theirshoulders and waists.

"It's actually a beautiful piece of hardware,"Stott said. "I think it's going to be a really excellent piece of exerciseequipment. We're actually really looking forward to getting to run all overCOLBERT."

The hardware is also specially designed to spread a minimumof vibrations through the space station, so as not to disturb the sensitivescience experiments and instruments onboard.

Now that it's built, the COLBERT should only need anoccasional greasing of its bearings to stay operational. The treadmill is builtto handle 150,000 miles of running, NASA officials said.