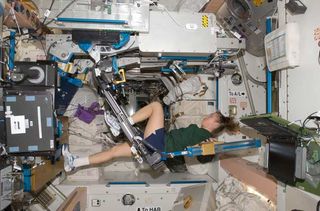 Astronauts may need to boost their Bowflex-like resistancetraining to stave off muscle loss during long space missions, a new study says.

The NASA-sponsored research found that crewmembers of theInternational Space Station lost roughly 15 percent of muscle mass and 20 to 30percent of muscle performance during the average six-month stay at the orbitallab. The solution: Push more resistance training instead of aerobicexercise.

Space station residents currently exercise at least twohours each day to prevent their muscles and bones from wasting away in theweightless microgravityenvironment. The recent study showed a range of astronaut exerciseregimens, including five hours per week spent on aerobics, and anywhere fromthree to six days per week spent on resistance training.

Trappe assessed muscle loss based on muscle biopsysamples. This represents the first time that the procedure has been allowed forastronauts who completed long-duration missions.

"By clinical standards, this is a massiveloss," Trappe said. "This approaches what we see in aging populationsin comparisons of a 20-year-old versus an 80-year-old."

Researchers recommended more resistance training to avoidmuscle loss, based on ground-based bed rest studies that last anywhere from 60to 90 days.

The space station's gym includes an Advanced ResistanceExercise Device that NASA delivered in November 2008, along with bungee-likeresistance bands and an exercise bike. Astronauts recently had to pryopen the exercise bike and clear a strap that had jammedthe pedals.

Given the new findings, detailed in the Journal ofApplied Physiology, space denizens may want to work out with than just an exercisebike, anyway.

"From our bed rest studies, we found that whenhigh-intensity resistance and aerobic exercise are balanced correctly, this isan effective prescription that is quite therapeutic in protecting skeletalmuscles in a simulated microgravity environment," Trappe noted.

An earlier survey of 13 space station residents foundthat three had lost as much as 30 percent of bone strength, makingthem as frail as older women on Earth who suffer from osteoporosis.

NASA is carrying out more studies to continue improvingexercise regimens, and hopefully help astronauts avoid the worst of such healthproblems, said Judith Hayes, a NASA deputy chief of human adaptation andcountermeasures at the Johnson Space Center in Houston.