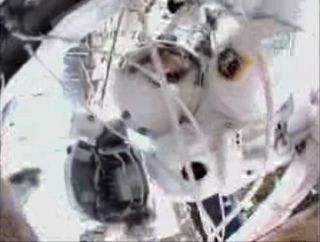 Swedish astronaut Christer Fuglesang is seen here through the spacesuit helmet camera of crewmate Danny Olivas during a Sept. 5, 2009 spacewalk during the STS-128 mission. Fuglesang's own helmet camera system can be seen floating loose at the lower left of the image.
(Image: © NASA TV.)

Thehelmet-mounted video camera and lights on Swedish astronaut ChristerFuglesang?s spacesuit popped free from their mooring, but luckily never fullycame unplugged. The glitch occurred late in what was an otherwise smoothseven-hour spacewalk, with Fuglesang and crewmate Danny Olivas accomplishingnearly all of their station maintenance tasks.

Olivasmanaged to attach a tether on helmet camera before it drifted away and handed it back to Fuglesang for safekeeping. MissionControl noticed the loose camera when views from Fuglesang?s spacesuit began toshift wildly.

?We thoughtyou were doing tremendousacrobatics,? Mission Control radioed the spacewalkers.

It was thethird spacewalk in five days for Discovery shuttle astronauts, who launchedlast week on a 13-day mission to deliver a new crewmember and supplies tothe space station. Mission Control packed the excursion with odd jobs to repairstation systems and prepare for future construction.

Fuglesangwas wrestling with a stubborn power cable connector that refused to plug in -the spacewalk?s only other hitch - when the camera glitch occurred. CrewmatePatrick Forrester, who choreographed the work from inside Discovery, told himto stand down for fear of shaking the camera completely loose.

Without theaid of his helmet camera and attached lights, Fuglesang returned to the spacestation?s airlock before the sun set as the station passed over the Earth?snight side.

?Christer,no need to rush but hurry every chance you get,? Forrester said. ?Sunset inabout six minutes.? Fuglesang made it back inside safely and was ready to usehis dismounted helmet lights as a flashlight if needed.

Fuglesang saidhe may have bumped the camera against part of the station to set it free. But ZebScoville, lead spacewalk officer for Discovery?s flight, said the system isdesigned to prevent that and an unseated latch is more likely the culprit.

Olivas, themission?s lead spacewalker, and Fuglesang made quick work of deploying afold-out platform on the station?s starboard side. The platform will serve as astorage point for large spare parts due to be shipped to the station during aNovember shuttle flight.

They alsoinstalled a pair of new Global Positioning System antennas and replaced afailed component in the station?s attitude control system, as well as a brokencircuit breaker box. Mission Control tested the replaced devices while thespacewalkers were still outside and declared the repairs a success.

Thespacewalkers also uncoiled and installed two 60-foot (18-meter) power and datacables so they can support a new space station room, called Tranquility, whichis due to be delivered to the outpost next year. It was one of those powerconnectors that refused to lock in place, so the astronauts secured it down andmoved on.

Spacestation flight director Heather Rarick said astronauts on a future mission willtry to connect the power cable and, if necessary, draw up a backup plan to get powerto Tranquility. The new room is not slated to arrive at the station untilFebruary 2010, so there?s no rush, she added.

?Wedefinitely have some time,? Rarick said.

Saturday?sorbital work marked the 133rd spacewalk dedicated to spacestation construction and the fifth career excursion for both Olivas andFuglesang. Olivas ended the day with 34 hours and 28 minutes of totalspacewalking time under his belt while Fuglesang finished with 31 hours and 54minutes.

With fivespacewalks to his name, Fuglesang - who represents the European Space Agency onDiscovery?s crew - is now the most experienced spacewalker who is not Americanor Russian. The world spacewalk record is held by Russian cosmonaut AnatolySolovyov, who performed 16 career spacewalks.

Discoveryastronauts spent a total of 20 hours and 15 minutes working outside thestation during their three spacewalks. They replaced a massive ammonia coolanttank and retrieved old experiments on the other two excursions.

Inside thespace station Saturday, astronauts continued packing up the 21-foot (6.4-meter) longcargo module that they brought to the space station with trash and other equipmentno longer needed on the orbiting lab. They also replaced a jammed bolt, one of16 bolts securing the cargo module to the station, during a five-hour repair.

On Sunday,the astronauts will finish packing up the cargo module and prepare to return itto Discovery?s payload bay. The shuttle is due to undock from the space stationTuesday and land in Florida Thursday evening.