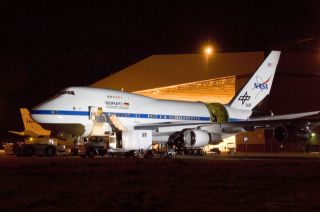 A team ofinternational partners is developing eight instruments that will enable SOFIAto study the universe primarily in the infrared spectral band, but withcapabilities extending from wavelengths of 0.3 to 1600 microns, acrossultraviolet, visible, infrared, and sub-millimeter ranges.

?Workingwith our German colleagues, we are eagerly anticipating SOFIA?sFirst Light flight,? said Erick Young, SOFIA?s recently appointed directorof Science and Mission Operations. ?SOFIA will be a discovery engine for the next20 years, and our collaborator teams have spent a number of years perfectingthese powerful scientific instruments.?

Four of thenewinstruments are now ready for use on the airborne observatory. They includea mid-infrared camera developed at New York?s Cornell University known as theFaint Object infraRed Camera for the SOFIA Telescope, or FORCAST (operating awavelengths of 5-40 microns); a heterodyne spectrometer called the GermanReceiver for Astronomy at Terahertz Frequencies (GREAT ? 60-200 microns)developed at the Max Planck Institute for Radioastronomy, Bonn, Germany; theLowell Observatory?s High-Speed Imaging Photometer for Occultations, or HIPO(0.3 to 1.1 microns); and the Far-Infrared Field-Imaging Line Spectrometer(FIFI-LS, 42-210 microns) developed at the Max Planck Institute forExtraterrestrial Physics, in Garching, Germany.

Followingthe first four instruments will be the CAltech Submillimeter Interstellar MediumInvestigations Receiver (CASIMIR), another heterodyne spectrometer (250-600microns) being built at Caltech, Pasadena, Calif.; the High-resolution AirborneWideband Camera (HAWC), a far infrared bolometer camera (50-240 microns)developed by the University of Chicago; Echelon-Cross-Echelle Spectrograph(EXES), an echelon spectrometer (5-28 microns) under construction at theUniversity of California at Davis; and the First Light Infrared Test ExperimentCAMera (FLITECAM), a near infrared camera (1-5microns) developed at UCLA.

Three ofthe first nine instruments have been thoroughly tested on ground-basedtelescopes ? HIPO at the Lowell Observatory in Arizona, FLITECAM at theUniversity of California?s Lick Observatory, and FORCAST on Caltech?s Mt. Palomarfive-meter telescope. HIPO has also been mounted on SOFIA?s telescope and usedto observe celestial objects from the ground to test the observatory?s systems.FORCAST is slated for installation on SOFIA?s First Light flight, when photonsfrom a celestial object come down the telescope tube for the first time whilethe aircraft is airborne.

GREAT,which has been tested in a lab environment, awaits its flight opportunity whereit will be able to demonstrate its capabilities. This spectrometer has not yetbeen tested onboard SOFIA because it analyzes infrared wavelengths that areentirely inaccessible from the ground.

SOFIA will fly withone instrument fitted to the telescope for each airborne observation period.When flying science missions, SOFIA cruises between 39,000 and 45,000 feet at aspeed of Mach 0.8 (520 mph) on seven- to nine-hour observing flights. In fulloperations the observatory will fly typically three nights per week forapproximately 1,000 hours of observing time each year. SOFIA?s telescope weighs34,000 pounds and was built in Germany by MAN Technologie AG and Kayser-ThredeGmbH. It has an elevation range of 20 to 60 degrees above the horizon, and anunvignetted field-of-view diameter of 8 arcmin (a quarter the diameter of thefull moon).

SOFIA isthe successor to NASA?s extremely successful Kuiper Airborne Observatory(KAO), a modified Lockheed C-141 fitted with a one-meter infrared telescope.KAO operated from NASA Ames from 1974 to 1995, and made such astronomicaldiscoveries as the rings around the planet Uranus, the atmosphere surroundingthe planet Pluto, and the presence of water vapor in the interstellar medium.