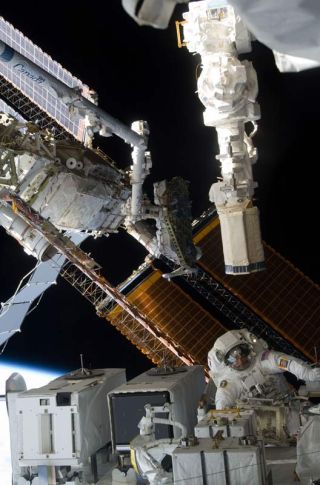 Astronaut Christopher Cassidy, STS-127 mission specialist, is pictured in the lower right corner of this July 22, 2009 image from Endeavour's third space walk of a scheduled five overall for the STS-127 mission. He is working on the station's Kibo porch. The ISS robotic arm and a cargo pallet containing new batteries rise can be seen behind him.
(Image: © NASA)

Two astronauts will head out on an extra-long spacewalk Friday to make up for lost time after a spacesuit glitch waylaid efforts to replace old space station batteries earlier this week.

Astronauts Chris Cassidy and Tom Marshburn plan to spend at least 7 1/2 hours working outside the International Space Station during their mission's fourth spacewalk to swap out the last four of the six outdated solar array batteries. The work is slated to begin at 9:58 a.m. EDT (1358 GMT) as the station flies 220 miles (354 km) above Earth.

"Certainly I'd like to get four done, but if we get three done I'll be happy," NASA's lead space station flight director Holly Ridings told reporters late Thursday. "Two is a place where we need to be by the end of the day."

An attempt by spacewalkers to replace four of the six batteries on Wednesday was hindered by some stubborn bolts and an issue with Cassidy's spacesuit that led to rising levels of carbon dioxide inside. Cassidy, a former U.S. Navy Seal, was never in danger of carbon dioxide poisoning, but the glitch forced Mission Control to call off the rest of the work with only two of those four batteries replaced.

"It was a total surprise to me that it was climbing high," Cassidy said of the carbon dioxide level in his spacesuit during a series of televised interviews Thursday. "I felt no symptoms and it was not really that much of a concern. I was confident that they had my health in mind."

NASA engineers believe that Cassidy's strenuous effort early in Wednesday's spacewalk, which was his first ever, may have caused his spacesuit's air-scrubbing canister to dry out and not function properly later in the excursion.

"In folks' memories, this is something that we've never seen before," Ridings said.

Spacewalk planners asked Cassidy to use a new air-scrubbing canister and take it easy during today's spacewalk.

"We've explained to them that it's important that they don't go out really excited and really fast like you normally would on your first spacewalk," Ridings said. "It should work correctly."

Today's spacewalk will be the second for both Cassidy and Marshburn, who are making their first spaceflight on Endeavour's 16-day construction mission to deliver a new experiment porch to the space station.

In other space news, an unmanned Russian cargo ship launched toward the station Friday morning from the Central Asian spaceport of Baikonur Cosmodrome in Kazakhstan. It is carrying 2.5 tons of supplies and will dock at the station next week after Endeavour leaves the outpost.

After some quick replanning following the spacesuit glitch, NASA added the two unfinished battery swaps to today's spacewalk, doubling the amount of work for Cassidy and Marshburn (they already planned to replace the final two batteries) and pushing other tasks to their mission's final spacewalk set for Monday. If they don't finish the battery work today, NASA will add whatever is left to that fifth spacewalk, Ridings said.

"It's very important for us to get those batteries changed out," Ridings said.

Each of the 375-pound (170-kg) batteries is about the size of a small refrigerator, astronauts have said. There is a set of batteries for each of the space station's four solar arrays to store power when the station is flying over the Earth's night side. They are designed to last about 6 1/2 years, but the ones at the very edge of the station's left side have been working for nine years. NASA launched them in 2000 as part of the station's first set of solar wings and wants to replace the aging batteries before they die.

Changing the batteries is a bit tricky because of their location. They sit at the edge of the left side of the station's main truss, a metallic backbone as long as an American football field.

To reach the work site, spacewalkers must venture 150 feet (45 meters) away from the airlock, a place out of reach of the station's robotic arm and its cargo pallet holding the new batteries.

So Cassidy and Marshburn will have a tedious job ahead to remove the old batteries one-by-one, shuffle them by hand across the gap between their work site and the cargo pallet with the new batteries, and then make the return trip to install the new units. They'll try to do that four times today working in concert with astronauts inside the station driving the robotic arm.

"The task in and of itself, of physically pulling out a battery and putting it in, is not necessarily the hard part," Cassidy said in a NASA interview. "The hard part is the choreography with the folks moving the arm."