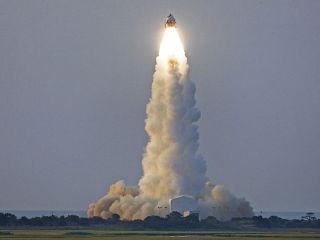 An unmannedprototype for a new astronaut escape pod launched high above the Virginia coastearly Wednesday during a NASA test flight.

The bullet-shapedescape ship blasted off at 6:26 a.m. EDT (1026 GMT) today from a seaside pad atWallops Island, Va., during the successful test. The vehicle is an alternativedesign to one planned to carry astronauts to safety during launch emergencies forNASA?s new Orion spacecraft. Orion capsules will replace the agency's aging space shuttle fleet and are slated to make their first operational flight by 2015.

?Everything,preliminarily, looks like it was a good test,? said Keith Koehler, a spokesmanfor NASA?s Wallops Flight Facility. ?To say the team is very excited about the launchthis morning is an understatement.?

The prototypeescape ship is not meant to replace the tower-based abort system selected for theOrion spacecraft. But data gleaned from today?s test flight may help shape thataccepted Orion system, which is slated to make its first launch abort testlater this year.

?There isdata that they?ll be sharing,? Koehler told SPACE.com.

DuringWednesday?s test, the MLAS vehicle rose high above the Virginia coast,jettisoned its engine ring and then deployed parachutes from its bullet-shapedshell as it began to fall back toward Earth. The shell popped free from afull-size mock up of an Orioncrew capsule a short time later, which then deployed its own parachutes andsplashed down in the shallow waters of the Atlantic Ocean near the WallopsIsland coast.

?The flightwas a little less than a minute,? Koehler said.

Missionplanners expected the MLAS prototype to launch as high as a mile (1.6 km) intothe sky during the test, which had been delayed since late June due to weatherand final work required on the vehicle. The test had an estimated cost of about$30 million, NASA officials have said.

NASA?sOrion spacecraft will use a proven abort system that uses a rocket enginemounted to tower atop the vehicle?s cone-shaped crew capsule to rip the vehiclefree of its Ares I rocket during a launch emergency and carry astronauts tosafety. The first operational Orion flights are slated to begin no earlier than2015 under NASA?s plan to return astronauts to the moon by 2020.

Similar escapesystems were used during NASA?s Apollo and Mercury programs during the 1960sand 1970s, though the two-man Gemini vehicles that flew in between featuredejection seats instead of an abort tower. Ejection seats were also aboard thefirst test flights for NASA?s space shuttle fleet, but were later removed.

A recentU.S. Air Force study has questionedwhether the current Orion Launch Abort System is powerful enough to safelypropel astronauts away from a launch emergency. But NASA officials have saidthat supercomputer analyses will show that their chosen launch abort system willwork.

Unlike theOrion system, which places a single escape motor in a top-mounted tower, theMLAS system uses four rocket engines distributed around a booster ring at the base of thesnub-nosed capsule. The flight test vehicle launched today resembled awhite bullet with stubby wings attached.

Koehlersaid MLAS engineers have begun analyzing the data collected during today?slaunch test. A recovery team is expected to retrieve the test vehicle from the shallowAtlantic waters off Virginia?s coast on Thursday, he added.