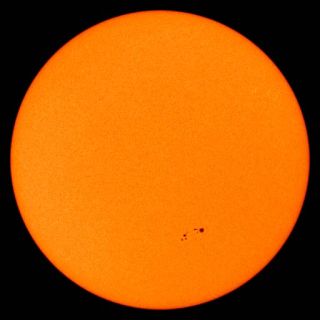 Sunspot groups 1024 developed over the 4th of July weekend, and while it did not create any historically spectacular fireworks, it has been kicking up modest solar flares.
(Image: © SOHO/MDI)

After one of the longest sunspot droughts in modern times, solar activity picked up quickly over the weekend.

A new group of sunspots developed, and while not dramatic by historic standards, the spots were the most significant in many months.

"This is the best sunspot I've seen in two years," observer Michael Buxton of Ocean Beach, Calif., said on Spaceweather.com.

Solar activity goes in a roughly 11-year cycle. Sunspots are the visible signs of that activity, and they are the sites from which massive solar storms lift off. The past two years have marked the lowest low in the cycle since 1913, and for a while scientists were wondering if activity would ever pick back up.

During 2009 so far, the sun has been completely free of spots about 77 percent of the time. NASA researchers last month said quiet jet streams inside the sun were responsible, and that activity would soon return to normal.

The new set of spots, named 1024, is kicking up modest solar flares.

Sunspots are cool regions on the sun where magnetic energy builds up. They serve as a cap on material welling up from below. Often, that material is released in spectacular light shows called solar flares and discharges of charged particles known as coronal mass ejections. The ejections can travel as space storms to Earth within a day or so, and major storms can knock out satellites and trip power grids on the surface.

Prior to the low-activity period, astronomers had been predicting that the next peak in solar activity, expected in 2013, might be one of the most active in many decades. That forecast was recently revised, however, and scientists now expect the next peak to be modest.

All this matters because, as laid out in a report earlier this year by the National Academy of Sciences, a major solar storm nowadays could cause up to $2 trillion in initial damages by crippling communications on Earth and fueling chaos among residents and even governments in a scenario that would require four to 10 years for recovery. Such a storm struck in 1859, knocking out telegraph communications and causing those lines to erupt in flames. The world then was not so dependent on electronic communication systems, however.