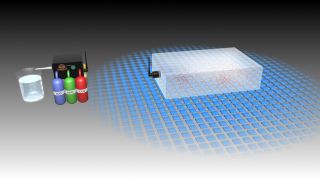 Still image from EvoGrid the Movie, showing the ‘equipment’ that would simulate organisms in a digital primordial soup, and then turn them into real creatures using chemistry and a nano-fabricator. Image
(Image: © DigitalSpace.)

The powerof computer processing could one day solve the riddle of life?s origin.?

Scientiststhink life appeared about 4 billion years ago, and ancient rocks on Earth cangive us some idea of what the environment was like. Life mayhave originated in an ocean rich in chemicals. This primordial soup mayhave been simmering, or it may have been zapped by lightning. Certainly energyof some sort must have helped drive a simple chemical system into a morecomplex state. But the clues are few, and the picture remains hazy.?

Enter theEvogrid, a computer creation concept that would be a digital version of theprimordial soup. The EvoGrid was dreamed up by a group of internationaladvisors and Bruce Damer, the founder of a research company that creates 3-Dspacecraft and mission simulations for NASA and the space community. Damer andhis chief architect, Peter Newman, are developing the EvoGrid concept byadapting GROMACS, a powerful open source molecular dynamics simulatororiginally developed at The University of Groningen in the Netherlands.

Eachvirtual particle within the Evogrid?s simulated liquid soup will haveparticular physical properties, and will behave accordingly.

?We will beconstructing a model of a ?toy universe?, which has approximate properties ofthe early oceans on Earth,? says Damer.

With alaundry list of basic physical properties entered into the starting parameters,the simulation would allow artificial nature to take its course. Interactionsand connections between particles should occur, and ever higher levels of complexitymay arise from the most basic elements.

Much likeSETI@home?s screen saver, which enables computers at home to search for signalsof extraterrestrial life within volumes of astrophysical data, the Evogridis conceived to have volunteer computers become part of an interconnected gridfor maximum processing capacity.? Damer hopes to eventually get a millioncomputers hooked into the grid.?

Thesecomputers would receive data from the EvoGrid simulation engine. The simulationwould essentially consist of a vast virtual ocean of interacting numbers thatwould model the time before complex life forms emerged. To know whetherself-organization is occurring, the program would look for persistent patternswithin the data.?

It isthought that some combination of a lipid container (vesicle), strings ofmolecules (genomes) and metabolic reactions led to the development of life. TheEvogrid won?t produce visual images of the combined effort of all the linkedcomputers, because it would slow the processing down too much. However, homeusers would see a visualization of what is being observed in their own smallpatch of the EvoGrid.

Damer notesthat present-day computer simulations run much more slowly than chemicalreactions, but he anticipates that in the next 20 to 40 years, with the help ofmillions of microprocessors, an entire cell could be simulated in cyberspace.

?NilsBaricelli wrote an artificial life program for the first modern computer in1953, and to some extent we haven?t gone much further than his originalexperiment,? says Damer. ?We shall see how far the EvoGrid can go, usingmillions of the descendents of the original Von Neumannmachine.?

Damerenvisions two possible versions of Evogrid: a hands-off ?Origins? version, andan experimental ?Intelligent Designer? edition that would allow people totinker with the simulation.? Damer says the ID edition of Evogrid could includea ?miracle module? that would allow users to play God in their attempts tocreate proto-life. The Origins edition would be the focus of the science,however, with strict controls to shield the experiment from any guiding humaninfluence.

Damer musesthat ?in its ultimate incarnation, a much more powerful EvoGrid would allow usto pose the question: where in this universe or others might life exist and atwhat level of complexity??? Damer thinks an EvoGrid tuned for SETI andastrobiology could be used to simulate extraterrestrialenvironments and address the question of whether life could have emergedthere.?

Even if theEvoGrid managed to generate some virtual but convincing life forms, eitherthrough random or directed means, ?the numbers will always be numbers,? saysDamer. ?As Baricelli wrote over fifty years ago, they will never be livingorganisms.?

But Damerdreams big, and he thinks someday the creatures generated by the Evogrid couldbe re-created chemically. A virtual scanner could be devised to break down thecomputer-based creature into its digital body parts, and then that informationcould be used to try to build the same creature out of real chemistry in thelab. Of course, this step of the experiment would rely on technology that doesnot currently exist. ?Life is more than the sum of its parts, and you can?tjust throw the necessary chemicals together and expect a life form to emerge,?Damer says.

However,researchers are hard at work trying to recreate all the biochemical stepsnecessary to synthesize a kind of proto-life in the lab, so perhaps thispossibility is not too far over the horizon.

Lookingeven farther into the future, Damer thinks that far more advanced EvoGrids,paired with ?ChemoGrids?, could be used to create a new genesis of cyber-physicallife forms to colonize asteroids, or to terraform Mars into a more habitableplanet for humans.

He expectsthat other intelligent civilizations in the universe probably harness the powerof evolution to solve difficult problems such as creating habitable zones tocolonize. ?This is a common theme in science fiction, but science fiction tellsus what could be possible someday,? he adds. ?The way for us to get there is tostart with simulation and ride the wave of ever greater computing power.?